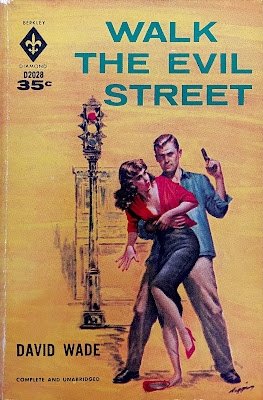 Norman Daniels, real name Norman Danberg, utilized a number of pseudonyms throughout his long and prolific career. His Gothic mysteries were often penned under Angela Gray, Suzanne Somers and even his wife's name, Dorothy Daniels. His Black Bat pulps were written under the name G. Wayman Jones. Daniels' literary work produced well over 15 different pseudonyms, so it was with no surprise that I found him using the name David Wade for a crime-noir titled Walk the Evil Street. The story was originally published by Magazine Productions Inc. in 1952 and reprinted in paperback format by Berkley Diamond in 1960.

Andy Mason is an Army veteran turned hard-nosed reporter. After numerous award-winning articles on crime, drugs and pushers, Mason gains the attention of an older former racketeer named Sam. The famed criminal invites Mason to his mansion with an unusual proposal.

The pitch, and the book's premise, is that Sam is now in his dying days, bound to his bed. He explains to Mason that his son Houleman is gay (frowned upon in 1952) and that his daughter Joyce is now a heroin addict. He's a widow and feels that his life has become a disappointment. Sam asks Mason to take Joyce to his rural Connecticut cabin to crack her habit and make her go clean. In exchange for unhooking her from the horse, Sam will provide Mason his entire diary collection. These books outline his past criminal activities and all of the associates that were involved in his enterprise. Feeling like this could be his career pinnacle, Mason accepts.

Daniels really excels by creating a sexual tension between Mason and Joyce. In addition, the author introduces Sam's daughter-in-law, a sex-starved nympho who was forced to marry the gay guy. However, Walk the Evil Street isn't a Gil Brewer styled sensuous love affair. By taking the job, Mason finds himself in a murder mystery when a body is found that connects Mason, Sam and his son. After fully contemplating the consequences, Mason begins to suspect that there's more to Sam's proposal than he originally thought. With the combination of Joyce's drugs, the nympho's appeal, Sam's dangerous past and a killer on the loose, Norman Daniels has plenty of slack to tie a great story together.

While the plot gets a bit convoluted, I found Walk the Evil Street as a solid crime-noir with a protagonist I really liked. Despite Joyce's drug addiction, I found her to be an exceptional character that the author clearly developed as the narrative tightened. With the plot's many aspects and character motivations, the narrative rarely left me bored or inattentive. I even appreciated the author's brief nods to Sam's pulpy past as a notorious 1930's gangster. It coincided well with Daniels' early pulp-fiction endeavors with the likes of The Black Bat and The Masked Detective.

Walk the Evil Street is another solid effort by Norman Daniels. He was a workhorse but rarely sacrificed quality for quantity. If you are new to the author, there's no reason not to start here. Highly recommended.