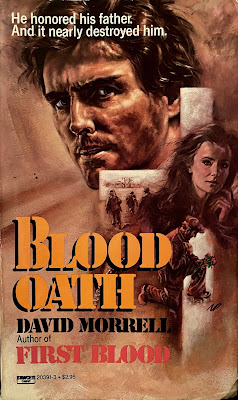 Canadian-American author David Morrell wrote First Blood in 1972 as his first published novel. The book was adapted into the blockbuster film launching the successful Rambo film franchise. With nearly 30 novels to his credit, Morrell has practiced in multiple genres including horror, action-adventure, mystery and even comics. I've always enjoyed his work and have owned his 1982 novel Blood Oath for awhile. The back cover features a Stephen King blurb that says he defies readers not to finish this novel in a single sitting. Taking the horror icon's challenge, I opened to the first page.

Peter Houston is a successful novelist and college professor. As a child, his father lost his life in a French battlefield during WW2. Pete's mother insisted that his father was a great man who gave everything for his country. After his mother passes away, Pete and his wife Jan journey to France to visit his father's battlefield grave for the first time. But, after asking the cemetery's U.S. military administration about his father's grave, they have no record of it existing.

When probing various U.S. diplomatic correspondents, Pete receives no helpful information about his father’s final resting place. As this odd mystery begins to unfold, Pete begins to imagine that maybe his father was never killed in the battle and is possibly still alive. The only clue may lie with the name Pierre de St. Laurent, a French soldier who promised Pete's mother that he would always be the caregiver for his father's grave. When speaking with the French residents in and around the battlefield site, the locals nearly run in horror at the mention of St. Laurent's name. After Pete and Jan are attacked multiple times, their luck finally runs out and Jan is murdered by an unknown assailant. Knowing her murder is linked to the mystery, Pete sets  out to find his wife's killer and to locate the real history about his father.

Blood Oath is like this fantasy marriage of Hammond Innes and Dean R. Koontz. It mixes in WW2 history, Nazi gold, high-altitude adventure and the idea of the average citizen on the run from strange and shadowy government operatives. The action moves at a breakneck speed with very little time for dialogue or discussion. The bad guys (no spoiler here) send waves of assassins after Pete and force him to utilize the training and expertise he's acquired while researching his own novels. It parallels Morrell's own expertise in firearms, evasive driving, outdoor survival, crisis negotiation - all skills acquired by the author during his research. I thought the pacing, character development and story progress were superb, but the ending was a real letdown with its indulgent castle setting and stereotypical villain.

If you are looking for a high speed, high adventure yarn, Blood Oath is certainly entertaining. Morrell has better books (Creepers for example) and whether or not this is a mandatory read is going to depend on how deep of a fanboy you are for this author. As to Stephen King's challenge, this one took me two days and wasn't the same enthralling experience he predicted.