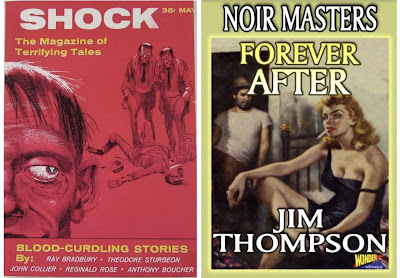 In May 1960, Winston Publications launched a short-lived horror literary digest called Shock: The Magazine of Terrifying Tales with a cover illustration by Jack Davis from EC Comics. The magazine mostly reprinted classic horror and suspense stories from Weird Tales and Argosy, but the debut issue also contained an original short story by Jim Thompson titled “Forever After.” The story has been reprinted on Kindle for a buck from Noir Masters.

Mrs. Ardis Clinton is having a sexual affair with Tony, the dimwit dishwasher from the diner across the alley from her apartment. As the story opens, Mrs. Clinton has it all figured out: Tony is going to murder her husband with a meat cleaver allowing her to enjoy the widow’s life complete with $20,000 in life insurance dough. They just need to stage the apartment to look like a struggle took place during a robbery to give the murder an air of authenticity.

In order to give the ruse a sense of authenticity, Dumb Tony needs to rough up Mrs. Clinton to make it appear she was injured in the home invasion robbery that killed her husband. Meanwhile, it’s important to Mrs. Clinton that she’s wearing a skimpy negligee when her husband gets home, so Mr. Clinton can see what he’ll be missing before Tony cleavers the old man into the hereafter. The story’s tension mounts until the doorknob turns welcoming Mr. Clinton home for the last time...

“Forever After” is a nasty little story lasting only about ten pages, so I’m not going to spoil the plot any further for you. There’s an unexpected twist at the end that explains why Thompson sold the story to a fledgling horror digest rather than, say, Manhunt. It was also compiled in the 1988 collection Fireworks: The Lost Writings of Jim Thompson. In any case, “Forever After” is definitely worth reading. The easiest way to get a copy is to plunk down a buck and buy the digital copy for your Kindle. You won’t regret it for a moment.