From Carthage Then I Came (aka Eight Against Utopia) 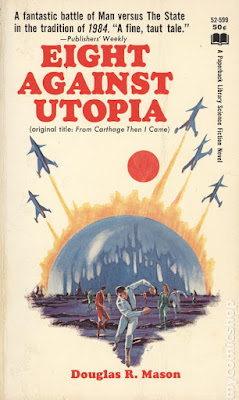 Douglas Rankine Mason (1918-2013) was a as British science-fiction author who was fairly prolific in the 1960s and 1970s. His first published work was a short story called “Two's Company” that was featured in 1964's New Writings in SF 1. After this publication, Mason launched a career as full-time novelist writing books under his own name as well as the pseudonym John Rankine. Along with the six-book series of Dag Fletcher space operas, Mason also authored stand-alone novels including From Carthage Then I Came. It was originally published by Doubleday as a hardcover in 1966. It was reprinted by Popular Library under the title Eight Against Utopia in 1967 and reprinted in 1970. I found the premise of the book intriguing and decided to try it out.

In the far future, the Mediterranean city of Carthage exists as a large domed city. For 7,000 years the people of Carthage have simply been living their lives inside of this dome due to the government's strict warnings that ice covers the entire planet. Inside the dome, the city's population is divided into sectors like education, administration, recreation and residential. But unlike other modern societies, Carthage's citizens don't experience any privacy. All of their thoughts and actions are monitored by a supercomputer that serves as the city's President. The very thought of leaving the city would warrant federal charges and possible execution. Government employee Gaul Kalmar discovers a secret...the  frozen planet narrative is all a lie. Earth is perfectly habitable.

Together with seven other individuals, Kalmar formulates a plan to escape Carthage. Like any good prison break story, the book begins with the obligatory discovery of a security gap. Using this as a pivot, the group must contend with the secret police, the President, the monitoring system and the fact that one of them is a traitor to the cause. This exciting premise places readers in and out of the dome in a way that keeps the novel perfectly halved; the first part in the prison and the second showcasing the inevitable escape.

As good as this premise is, Mason's writing style is strange and abstract and fails to provide great storytelling. The narrative is saturated with senseless dialogue and descriptions of advanced circuitry and technical nuances that I simply can't comprehend or relate. I imagine most of it is just simply tomfoolery on the author's part to construct this Dystopian civilization as being an advanced people. Thankfully, it is a short book and the sequences that are nearly unreadable didn't enhance or deter the narrative. The plot was contrived and concluded in a way that I felt justified the interesting premise.

In terms of Dystopian fiction, there are hundreds of novels in the genre for you to enjoy. Even in 1967, there was an abundance of books that featured people trying to escape from some sort of fortress city or a controlling, technically-advanced state. As such, Eight Against Utopia isn't a mandatory read, but if you feel inclined to spend a few hours under the dome, it is mildly entertaining. Just don't expect this to be the next 1984. It absolutely isn't.