Tiger By the Tail 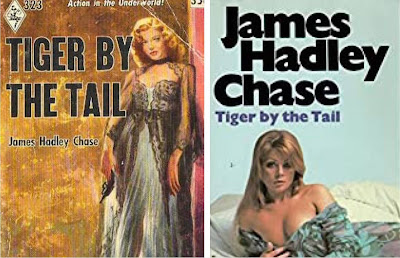 Tiger by the Tail was a 1954 paperback by James Hadley Chase, the popular pseudonym of Rene Raymond (1906-1885). The book was originally published by Harlequin before the imprint was exclusively romance novels and is often cited as being his finest novel.

After much hand-wringing, Ken calls Fay and sets up a date. Arriving at her apartment, Ken is pleased to find that Fay is gorgeous and charming with a killer body. They hit a nightclub and have a lovely time together. As they’re heading back to her place together, an astute reader of classic paperback thrillers just knows that something is about to go horribly awry. Sure enough, someone lurking in her apartment stabs Fay to death in her apartment with an icepick and leaves Ken with her dead body and the murder weapon.

The bad thing about being at the wrong place at the wrong time in a vintage crime fiction novel is that you’re almost certainly going to wind up the prime suspect. This forces Ken into a position where he needs to either lay low or solve the killing himself to save his own bacon and ensure that his wife never finds out he was catting around.

Meanwhile, the cops are also working to solve the murder, and this becomes a major focal point of the paperback’s second half. The police procedural sections dive headfirst into changing perspectives of the dysfunctional local department under the control of a sociopathic political boss. The rivalry among the local political factions becomes a bit convoluted as the novel progresses, but the author regularly brings things back on track by returning to Ken’s adultery-murder dilemma.

Tiger By the Tail is an extremely well-crafted crime novel by an author with real chops. It’s currently out of print, but the paperback has been through countless re-releases since 1954. You shouldn’t have trouble finding a copy. It’s certainly worth your time.