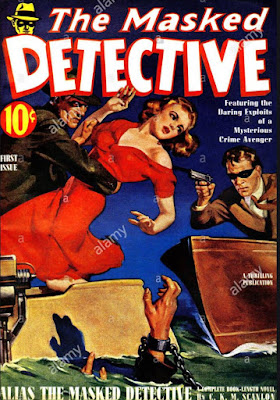 Before he ventured into three decades of paperbacks, Norman Daniels was one of pulp’s most published authors. Along with writing adventures starring The Purple Scar, The Eagle and Phantom Detective, he used the byline of C.K.M. Scanlon for a late pulp arrival The Masked Detective. The magazine's first issue, featuring “Alias the Masked Detective”, was published in 1940 and would run 12 total issues (a 13th story appeared in Thrilling Mystery). Daniels wrote the first few issues before handing the project off to Sam Merwin Jr., W.T. Ballard and other work-horse authors of that era. I purchased The Masked Detective Archives Volume 1 from Thrilling Publications, published in 2017 and featuring reprints of the first three Masked Detective stories.

Essentially, The Masked Detective is a standard vigilante named Rex Parker. Unlike other pulp heroes of the time, Parker isn't a wealthy entrepreneur or district attorney. Instead, Parker is a newspaper reporter who practices martial arts in his spare time. Using the French art of la savate, Parker routinely gives Hell to a plastic mannequin in his apartment. When his friend and newspaper colleague Winnie Bligh witnesses his fists of fury on the dummy, she suggests that he utilize his skills to fight the city's rising crime problem. Parker agrees and the two decide that an eye mask (black bandanna with eye holes) and some make-up could transform the easily identifiable Rex Parker into the unidentifiable night vigilante The Masked Detective!

Along with the origin tale, “Alias the Masked Detective” also features Parker's first crime-fighting adventure. A criminal named Carson is “accidentally” knocking off professors, art critics and antique collectors thinking that they are rival gangsters. But are these accidental murders really just cases of mistaken identity? After this sequence of murders continues, Parker, Bligh and a homicide detective named Gleason team up to root out the real motive. There's a dense backstory about an art exhibit and precious jewels, but I didn't really care. Instead, I wanted a fist and feet vigilante flurry as Parker progresses to the inevitable fight with Carson.

I found this debut issue to be a really swift read with a propulsive narrative that was quite compelling. Beyond the far-fetched hi-jinks, which one has to overlook when reading this stuff, the story was presented in a gritty, violent way. In the opening pages, a professor is shot six times in the stomach and then two more times point blank in the skull. This was 1940, nearly 27-years before Mack Bolan began violently “executing” Syndicate snakes. When guys like Doc Savage and The Avenger mostly tend to repress lethal blows, Parker proves to be the opposite. As also seen in The Black Bat, Daniels isn't afraid of a little bloodshed.

If you love this era of pulp storytelling, there's no reason why The Masked Detective isn't in your library already. This was well-executed and just a real pleasure to read. You can buy a copy of this awesome omnibus HERE.