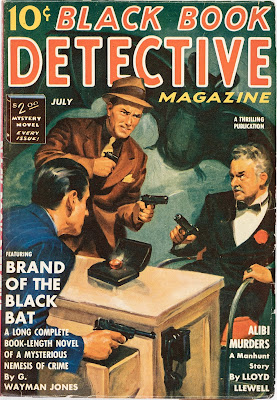 Thrilling Publications, also known as Standard Magazines, created a number of pulp characters  including Green Ghost, Crimson Mask and The Phantom Detective. Beginning in July 1939, the publisher introduced The Black Bat (not the 1933-1934 character) in their magazine Black Book Detective. This character was created and written by Norman Daniels (under the name of G. Wayman Jones), a prolific author who cut his teeth on early short stories featured in pulps including All Detective, Shadow Magazine and Detective-Dragnet. The Black Bat character appeared from 1939 through 1953, encompassing a total of 64 issues. After enjoying many of Daniels' crime-noir paperbacks, I was anxious to read his pulps. I'm beginning with the very first Black Bat story, "Brand of the Black Bat", published in July, 1939 and featured in Thrilling Publications' The Black Bat Archives Volume 1 from 2017.

In this origin tale, the author introduces readers to Tony Quinn, a highly successful District Attorney working in an unnamed metropolis. In the opening pages, Quinn's home is burglarized by a destitute man named Silk. Oddly, once Quinn discovers this intruder in his bedroom, Silk explains that he can hear someone else in the house. After Quinn receives Silk's apology, he places him in a closet and welcomes the next intruder, a hired killer who works for a notorious criminal named Snate. After the man attempts to kill Quinn, Silk reacts and assists Quinn in killing the assassin. Quinn then hires Silk to be his bodyguard.

Later, when Snate is on trial for murder and extortion, his goons kill a witness in the courtroom in a wild melee of violence. During the exchange, Quinn is splashed with a deadly acid leaving him blind and horribly disfigured (think of Batman's Two-Face character). Snate is found innocent, and all of the charges are dropped. This entire debacle leaves Quinn and Silk searching for justice. Thankfully, a mysterious woman arrives at Quinn's house and orders him to a small rural town for a highly secretive eye-surgery.

After completing the surgery, Quinn finds that his eyes have become nearly telescopic. He can see things in the most vivid detail including the ability to see in the dark. Using his known disability, Quinn takes on the secret disguise of a hero named Black Bat (complete with facial mask and cape) while still being the very blind public figure of Quinn. This dual identity keeps him from being identified as this heroic nighttime vigilante.

Norman Daniels has a lot of fun with this wacky pulp tale. Origin stories are always important and I think the author did a fantastic job making Quinn's journey from civilian to crime-crusader into a compelling story. The Black Bat's first case brings him full circle to Snate, an inevitable showdown between hero and villain. Unlike Doc Savage, Quinn doesn't avoid killing. His weapons are two guns that he uses with pinpoint accuracy. Shockingly, Daniels' includes a ton of violence to make The Black Bat a really gritty read. There's torture by blowtorch, stabbings, beatings and gunfire. I was surprised at the level of violence and death, but appreciated the gritty realism to combat the far-fetched fantasy. Eventually Quinn builds a team that is similar to those of The Avenger and Doc Savage. It isn't necessarily about the lone hero, but the collective teamwork used to investigate and eliminate the wrongdoers.

If you love this early pulp-fiction era, The Black Bat should be mandatory. It's a fun, over-the-top hero story filled with violence and intrigue. With the affordable price on these reprints, I definitely recommend Volume 1 which chronologically collects not only this story but also "Murder Calls the Black Bat" and "The Black Bat Strikes Again." There's also an introduction by acclaimed pulp collector Tom Johnson (RIP).