Murder is my Mistress 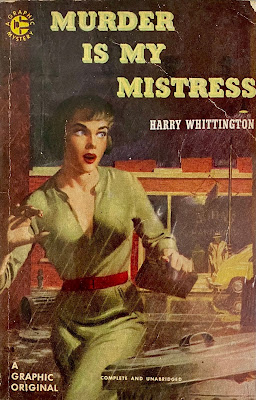 After a decade of short-stories, Harry Whittington's first contemporary novel was published in 1950. A year later, the author's fruitful career was in full swing with a handful of original paperbacks including Murder is My Mistress. The book was published as Graphic Mystery #41 and has never been reprinted.

The book introduces housewife Julia Clarkson. She's living an unexceptional existence as a suburban wife and mother in the small town of Elm City. Julia is married to a respectable wealth manager named Roy, and the couple has two teenagers. In the opening pages, Julia barely avoids a deadly accident when her tire blows out on the highway. After consulting with her local mechanic, she discovers that someone may have slashed the tire. Fearing that her husband's career and schedule could be impacted by her distress, Julia continues her normal routines. But, after the family's stove explodes and kills their housekeeper, Julia's trepidation is validated. Someone is trying to kill her.

Considering this is 1951, the book emphasizes a heroic feminism. Whittington positions Roy to be non supportive, merely representing the family's breadwinner without possessing the genre tropes of a strong male protagonist. Julia keeps her rather turbulent past from Roy in a way that protects him and his insecurity, a stark contrast from the typical crime-noir. As the book reaches the revelation point, Whittington does pair Julia with a smart detective named Bellows. But again, he's really second string to Julia's leading role.

By 2021, we've watched or read this sort of story before. The woman on the run from some sort of abusive past. The genre's highlight may have been Nancy Price's 1987 novel Sleeping with the Enemy, later adapted into a successful film starring Julia Roberts. Oddly, I found some aspects of this story (revenge on the prosecutor) reversed for John D. MacDonald's 1957 novel The Executioners, later adapted to film twice as Cape Fear.

Regardless of subsequent literary works, Whittington does deliver a fantastic story in Murder is my Mistress. Even the title is a clever nod to a plot point. With a unique hero, a brisk pace and the core mystery, Whittington proved he was a masterful storyteller early in his writing career. There are better Whittington books, but this early novel certainly set the table for what was to come. If you can afford the high-priced used paperback, it's certainly worth your time.