So Fair, So Evil 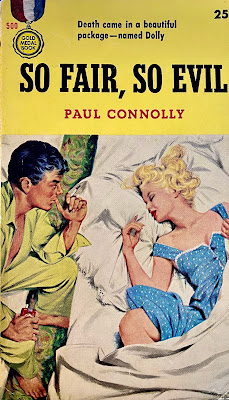 Thomas Grey Wicker (1926-2011) graduated from the University of North Carolina and began a career in journalism in 1949. His New York Times column “The Nation” ran from 1966 through 1992. In addition to his newspaper reporting, Wicker authored three stand-alone crime-noir novels – Get Out of Town (1951), Tears Are for Angels (1952) and So Fair, So Evil (1955). All three were originally published by Fawcett Gold Medal under the pseudonym Paul Connolly. In March 2021, Cutting Edge has released a reprint of So Fair, So Evil. I've owned the paperback for years and decided now would be a great time to read it.

From a first-person perspective, a guy named Frank explains that his wife Dolly died in a tragic automobile accident on a lonely stretch of Alabama highway. A year later, Frank has returned to the city of Huntsville with a lot of emotional baggage. He's been in a mental institution since Dolly's accident and still hasn't come to grips with the events that led to her death. It's during a cab ride that Frank requests to stop at the dismal crash site, essentially a pile of gravel marked by a large boulder with the word “Repent” painted in red letters. It's here that readers learn of Dolly's death and that Frank is a loose cannon.

In Huntsville, Frank returns to Dolly's childhood home, a sprawling Southern plantation called Old Hundred. It's here that Dolly was raised with her half-brother Harry. The family is filthy rich and in wisely-spaced backstory flashbacks, readers learn of how Dolly met Frank, the proverbial poor guy from across the tracks. Frank never fit in with Dolly's wealthy pedigree and in “grin and bear” fashion received a chastising of his vocation as a soldier in the Korean War. Dolly and Harry were inseparable as siblings and that affectionate relationship played havoc on Frank's insecurities.

Wicker's novel is a showcase of emotions as Frank spends a Fourth of July weekend with Harry and all of the family's friends and colleagues. There's a number of characters (a pen and an index card is helpful) at the house including Harry's wife Ellen, an equal to Frank in terms of being an outcast. Their emotional chemistry explodes into a sexually riveting scene. Also, a loner named Ann helps to enhance the plot when she befriends Frank and begins to sympathize with his feelings of wretched despair and loneliness. Frank's demeanor is foreboding with increasing feelings of paranoia and suspicion as the pages turn. Ultimately, Frank believes Dolly's auto accident was a set-up by one of Old Hundred's guests. It's on this premise that Wicker builds a tight character study that consumes most of the book's narrative.

As a crime-noir, So Fair, So Evil is a compelling, slowly-evolving story that combines adultery, lust and greed with a deep-seated insecurity. This combination is enthralling with the author's presentation of man's psyche central to the story. How can the average man cope in a marriage saturated with jealousy and suspicion? The book is similar to Gil Brewer's 1952 novel Flight to Darkness. In that story, which is also set in Alabama, a Korean War vet is a recently released mental patient with regrets about a fellow soldier being killed. Unlike Gil Brewer's sexy murder-frenzy, Wicker plays it mostly straight with traditional fornication draped in mystery. For the most part, he succeeds and delivers an interesting story that surprisingly rivals Brewer's work.