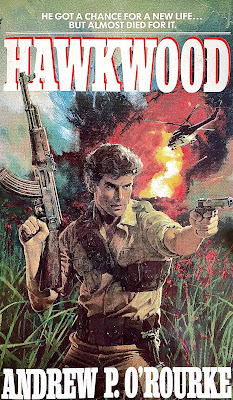 Andrew P. O'Rourke (1933-2013) was a judge and County Executive of Westchester Country, New York, He was also the Republican candidate for New York governor in 1986, eventually losing to Mario Cuomo. Along with his political aspirations, O'Rourke pursued a short writing career in the 1980s. He authored two men's action-adventure novels, The Red Banner Mutiny (1985) and Hawkwood (1989). Discovering the latter novel at a used bookstore, I was intrigued enough by the artwork to tackle this 275 page Bantam novel.

The novel's opening chapter is one of the more suspenseful sequences I've read in a long time. The set-up is that a man and his family have been targeted by Mob killers. These opening pages play out as a cat-and-mouse game where the assassins are in the man's house hunting the family from room to room. But, the man has a trap door that leads through the walls to a hidden staircase. In an attempt to escape with his family, they are caught in the basement and systematically murdered.

Next, a Vietnam veteran named Gerald H. Wood is on a plane recalling his most recent assignment, disabling an alarm system. Readers quickly put together that Wood clipped the electronic system so the Mob assassins could kill their target. Through a backstory that runs about 50 pages, readers are introduced to this titular hero. Wood graduated from college earning an engineering degree. Rather than pursue that lucrative career, he enlisted in the military and attended Officer Candidate School. Later, he became a Green Beret and gained himself 15 months in Vietnam. In the military he met and fell in love with a kingpin's daughter. Welcome to the family.

Hawkwood becomes a rather epic, sweeping character study when Wood becomes disenchanted with the Mob lifestyle. His wife wants a divorce, but Wood realizes divorce to the Mafia is more like death. In a convenient way, Wood is transporting four-million bucks on a commercial airliner when the plane crashes. Wood barely escapes death, but finds the disaster the perfect cover to flee the Mob. Using the cash, Wood takes the name of John Hawkwood, a historically famous Englishman turned mercenary. The book's second-half deposits Hawkwood in Argentina, and through a wild series of events, he's thrust into a war between Argentina and England in the Falkland Islands.

Obviously, there is a lot to unpack in Hawkwood. The origin portion of the novel is similar to Mark Roberts' introduction of Mark Hardin, the protagonist of The Penetrator series. There are some similarities with that title as well as James Dockery's presentation of Bucher in The Butcher series. The idea of a man on the run from the Mob is a popular one and O' Rourke does it well. The author is able to bridge together a number of major storylines, as well as transition the novel from a vigilante style, containing a few typical genre tropes, to a mercenary military adventure. Those are all positives.

The only negative aspect to Hawkwood is a deep transition into a type of Tom Clancy tech-thriller with time spent on analysis of the Argentina/English war and some of the military history associated with the highly contested Falkland Islands. I felt this removed Hawkwood from the action, and displaced a lot of the momentum and character building. I also found the ending fitting, but it certainly was a finale that could have created a series. The character's transformation, and setup, would have made for a sequel and future series installments if the author or Bantam wanted to pursue a continuation.

Hawkwood should appeal to fans of 70s and 80s action-adventure titles like Death Merchant, The Butcher, and The Penetrator. While slightly more literary, it has all of the genre tropes that those hefty series titles possessed. Recommended.