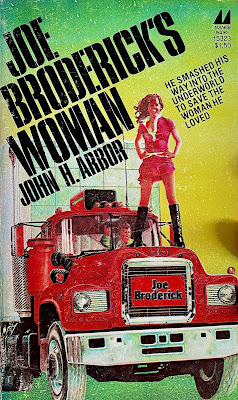 In the 1970s, Hollywood became fascinated with the large transport truck, aka “big rig”, “18-wheeler”, “tractor-trailer” or simply “Mack”. Films like Smokey and the Bandit (1977), White Line Fever (1975), Breaker! Breaker! (1977), and Convoy (1978) captured the heart and soul of the blue-collar truck-driving man, albeit with plenty of zany, over-the-top action hijinks that elevated the profession into a type of comic book heroism. The genre swerved into the men's action-adventure lane on occasion, prompting series titles like William W. Johnstone's Rig Warrior (1987) and Bob Ham's Overload (1989).

Manor Books published an action-adventure-trucker novel titled Joe Broderick's Woman. It was released in 1978 and was authored by a possible “one 'n done” author named John H. Arbor. My internet search produced no other results for the author. Based on the quality of the book, I was hoping Arbor had written more.

Joe Broderick is the owner and operator of a trucking company in Baltimore called Broderick Lines. Joe is former military and now lives a peaceful and successful life delivering the goods to a hard-earned book of business. In the novel's opening pages, readers gain a glimpse of the trucker lifestyle as more of a business with a secretary, driving crew, and various clients adding shipments to schedules. Not exactly Lincoln Hawk stuff (Over the Top, 1987).

Unbeknownst to him, Joe is married to a mobster's former mistress, a nice woman named Aletha. The two met a few years ago after Aletha successfully escaped the clutches of Sartorius Roth, a New Jersey kingpin. Aletha created a new life for herself, but warned Joe that she has a shady past and that someday her past may catch up to her. Now, pregnant, domesticated, and totally in love, Aletha is finally found by Roth's hired hands. While Joe is at work, the goons break into his house and capture Aletha.

Arbor's narrative is a three-way presentation consisting of the inner workings of Roth's empire and his right-hand man attempting to unseat him. This presentation also includes Roth's reunion with Aletha and the sentence he serves her. There's some graphic violence and rape as Aletha is thrown to the wolves as a sex servant for Roth's men, ultimately losing her sanity in the torture and abuse. The second presentation is that of Roth's current mistress, a woman named Rosalyn. She is skeptical of Roth reuniting with Aletha and wants to keep her position of power. The third storyline is Joe's hunt for Roth and his plans to rescue Aletha.

As a B-grade action novel, Joe Broderick's Woman wins on all levels. It has a great storyline that isn't far removed from the typical vigilante stories we all love – The Executioner, The Revenger, etc. It's brutal when it needs to be, emotional at the right times, and hard-hitting as a Mack truck when the bullets start to fly. I really liked Joe's character and his progressive relationship with a former mob girl named Darla as well as his team-up with a former military veteran named Hap. The vengeance angle never seemed forced to me, which is a testament to Arbor's patient writing style. It all comes to fruition in due time.

Whether John H. Arbor is a real guy or not remains to be seen. His style is reminiscent of Jon Messmann, but I don't believe Arbor was a pseudonym he used. With Manor publications, unmasking the identity of authors and artists is like trying to locate an honest representative in Congress. We may never find the answer. But don't let the mystery keep you from enjoying Joe Broderick's Woman. It's an entertaining 1970s beat 'em up that crosses lanes with trucker pop-culture. Recommended.