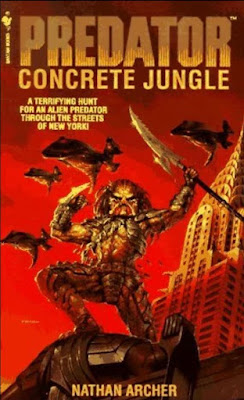 Nathan Archer was a pseudonym employed by science fiction and fantasy author Lawrence Watt-Evans for the publication of a 1995 media-tie in paperback, Predator: Concrete Jungle. The book was based on the 1989 Dark Horse Comics graphic novel with the same title by Mark Verheiden, which was based on the popular 20th Century Fox movie franchise.

The story is set in New York City during a severe August heat wave. Our heroes are two jaded NYPD homicide detectives named Rasche and Shaefer. The pair used to be narcotics officers, and they were transferred to the murder detail after some excessive force issues. If you’re a fan of fictional excessive force, this is the novel for you.

One night, a gang summit is ambushed and the cops make it to the tenement to find skinned gang-banger corpses hanging upside-down from the ceiling joists with their blood draining onto the floor below. It’s a grisly scene, and the cops fail to initially understand the severity of the threat. Of course, I knew who did it, but I had the benefit of seeing the cover of the paperback.

Rasche and Shaefer are stereotypical 80s movie cops at war with their own ignorant management hell-bent on covering up and minimizing the pending bloodbath to be unleashed on the city. The U.S. Army also gets into the containment and the denial act with all the ineptitude you’d expect from a genre story resting heavily on action movie tropes.

The upshot, as you know, is that Predator monsters from outer space are hunting humans in New York City armed with invisibility shields, energy cannons, pocket nukes, and deadly blades to filet their prey. Fans of the original Predator movie starring Arnold Schwarzenegger will be pleased with some Easter eggs tying this novel directly to the inaugural film.

The writing is mostly satisfactory. The action scenes are vivid and bloody in a plot that moves at a fast clip over 300 big-font pages. The dialogue is embarrassingly bad, but never bad enough to give up on the paperback. If the concept behind this media tie-in paperback appeals to you on any level, I promise it won’t disappoint. Recommended.