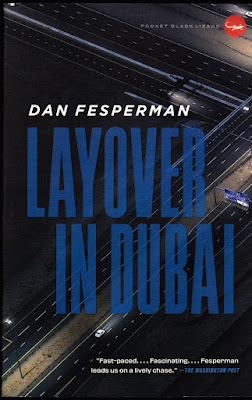 Former Baltimore Sun reporter Dan Fesperman was a foreign correspondent who travelled the world covering international events. He’s been racking up genre fiction awards since he became a novelist in 1999 drawing upon his knowledge of far-flung locales. My first exposure to his work was his 2010 thriller, Layover in Dubai.

Sam is a conservative and an analytical fellow with a lust for adventure. His employer is a big Pharma company similar to Pfizer. Sam is traveling with an older colleague named Charlie. In a Chapter One flashback, we learn that the Corporate Security Director has pressured young Sam into spying on Charlie during this overseas trip during the Dubai stopover.

Things go sideways pretty quickly when a gruesome murder occurs. Sam knows more than he’s willing to share with the police until his corporate masters arrive to provide guidance and support. We also meet two rival Dubai police detectives who are the best characters in the novel.

Throughout the paperback, Fesperman’s plotting is generally solid, but drags a bit in the middle. He doles out relevant facts judiciously through a combination of flashbacks and investigative revelations. Young Sam is not the only character with a hidden agenda driven by a large, shadowy bureaucracy, and the gamesmanship of the various characters was a pleasure to read. There’s a lot of interesting cultural tidbits sprinkled throughout the novel. You walk away from the book with a better understanding of cosmopolitan Dubai culture and the battle between modernity versus Emirati tradition.

Layover in Dubai successfully straddles a corporate thriller with a straight-up murder mystery enhanced by the modern, exotic setting in the Arab world. The young executive swept up in workplace intrigue recalls John Grisham’s The Firm in a foreign land. If the interesting setting for a modern-ish thriller appeals to you at all, you’re sure to enjoy this one. Recommended.