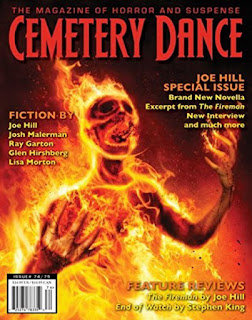 I can remember a time, long ago, when you had to mention that author Joe Hill was Stephen King's son. No one knew who the Hell Joe Hill was. But, times have certainly changed, progressions made, and, despite that I just wrote about the King connection, it is no longer necessary. Joe Hill is a household name. He's created his own successful bibliography, his own creations – his own empire.

Hill's novel NOS4A2 (2013) was a hit, prompting AMC to create a television series based on it. The same could be said for his novel Horns (2010), which was adapted into a film starring Harry Potter (or Daniel Radcliffe if you must). At the time of this writing, Black Phone has just disconnected from theaters, a film based on Hill's eponymous 2004 short-story. Hill excels in the graphic novel format as well, with popular series titles like Locke & Key (2008-2013), which was adapted into a series by Netflix, and Basketful of Heads, the first in a new DC imprint called Hill House Comics, shepherded by the author.

After reading Hill's novels Heart-Shaped Box (2007), NOS4A2 (2013), The Fireman (2016), and short-story collection 20th Century Ghosts (2005), I've developed a fondness for the author's writing style. After recently watching Black Phone, I went all-in on Joe Hill. I'm watching Locke and Key, downloaded a few of his comics, and just read the novella Snapshot, 1988, the subject of this review. It was originally published by the literary magazine Cemetery Dance, October 2016. It was later published as Snapshot in the collection Strange Weather (2017), along with three other novellas written by Hill. In 2016, Universal purchased the rights to the story for a future film release. 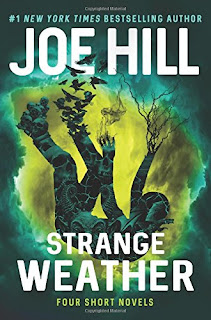 The story is told in present day, first-person narrative by Mike Figleone. He's recounting for the reader the events that happened to him at the age of 13, way back in 1988. Michael is like the nerdy kid from Cloudy with a Chance of Meatballs. He's a complete whiz-kid, a future Silicon Valley heavyweight. His mother is a bestselling author that ran away to Africa, leaving just Mike and his Dad to fend for themselves.

One day, Mike escorts his senile senior neighbor Shelly back to her house. She complains to him that she's been plagued by a “Polaroid Man”. Of course, Shelly's husband, and Mike, know this statement is just connected to her dementia. But, Mike runs into the Polaroid Man at a gas station the same day. Through a wild series of events, Mike finds a man that can take your picture with a special kind of camera. But, each photograph taken erases parts of your memory. Maybe Shelly's on to something with this whole Polaroid Man paranoia.

Snapshot, 1988 is a gem. It blends horror, fantasy and science-fiction into the perfect cocktail. The message on dementia and growing old wasn't lost, and, while not being preachy, reminds us of the true terror of big-tech and of future things to come. Mike is easily lovable and offers up some funny, candid commentary that's just right on the nose. It's easy to overdose on 80s nostalgia with so many movies, reboots and throwbacks saturating pop-culture. Thankfully, Hill doesn't overdo the era and offers just enough to keep the story from being indulgent.

I would be remiss if I didn't mention that Snapshot, 1988 also features cameo appearances from Hill's other work, most notably Black Phone and Locke and Key. If you aren't aware of those creations, then these Easter Eggs will just roll on. Also, like his prior work, Hill connects to his Dad with a mention of the Stand by Me soundtrack, an obvious nod to King's novella The Body, which the movie was based on.

Overall, there's nothing to dislike about Snapshot, 1988, and there's nothing left to elaborate on without spoiling the plot. Take my word for it, the novella is darn near perfect and highly, highly recommended. Take a shot.