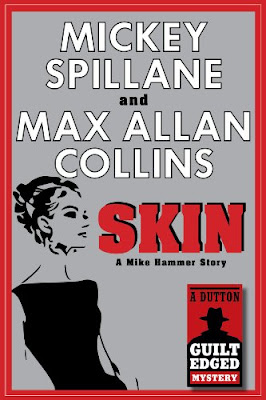 Before his death in 2006, Mickey Spillane told his wife to give all of his unfinished manuscripts to Max Allan Collins with the assurance, “He’ll know what to do.” Since then, Collins has polished, edited, and completed several of these novels and stories for publication. “Skin” is a 36-page Mike Hammer story that Spillane began in 2005 and was finally published in 2012 after completion by Collins.

The novel opens with Mike Hammer driving back from instructing at an upstate New York Police Academy with his best friend, NYPD Officer Pat Chambers. Interestingly, the authors have aged Mike and Pat and placed the old men in a modern setting with cell phones and computers.

While driving home, Mike notices the remains of a dead body along the side of the road. He stops and sees that the body is completely pulverized with nothing but a human hand intact. It’s almost as if the body fell out of an airplane or was gnawed into pulp by wild animals.

The hand in the pile of guts begins Mike’s journey to find the killer - even finding a sexy, nightgown-clad client in the hunt. As Mike approaches the truth, the authors employ some fairly terrifying horror-fiction elements. The climax is a bloodbath of brutal violence and street justice - the most exciting conclusion I’ve read in ages.

“Skin” is an edge-of-your-seat suspense thriller starring a famous aged detective still capable of making the pages fly by for the reader. As a fan of Collins’ work, I definitely saw his fingerprints all over the prose, and I’m genuinely curious what the division of labor was between these two crime fiction legends in this unlikely collaboration.

Leaving aside the mystery of primary authorship, “Skin” is one of the most satisfying pieces of ultra-violent fiction I’ve read this year. It’s an easy entry-point for those unfamiliar with Mike Hammer, yet there are plenty of series Easter eggs for long-time fans to enjoy. “Skin” is simply a masterpiece of short crime fiction. I promise you won’t be disappointed. Highest recommendation.