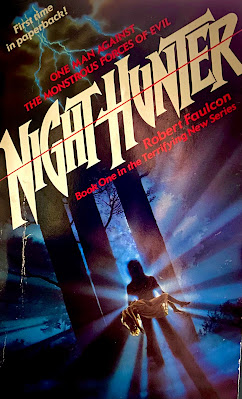 According to Wikipedia, Robert Holdstock (1948-2009) was a British author that specialized in science-fiction, horror, and fantasy genres. He won several literary awards for his novel Mythago Wood in 1984 and 1985, the first in a fantasy series about an ancient forest. Along with series titles like Berserker, Raven, and The Professionals, Holdstock authored a six-book supernatural series called Night Hunter using the pseudonym Robert Faulcon.

The series debut, The Stalking, and its sequel The Talisman, were published as a hardcover omnibus in 1987 by London's Century Hutchison. However, the series also debuted the same year in individual paperbacks by Charter. My wife purchased the debut, The Stalking, which is simply titled Night Hunter for this paperback edition, and provided it to me as a birthday gift.

Daniel Brady has a research position in England's Ministry of Defense. He lives an average life with his wife and kids in a Berkshire suburb. However, as the book begins, Brady and his wife both sense that something is in their house. They feel something watching them. Further, Brady's wife even experiences this unseen entity at her job. So, the book begins with a really creepy overtone.

Brady's entire existence is turned upside-down when a group of cult members, apparently possessing supernatural abilities, breaks into his house, rape his wife, and then capture his family. Severely injured in the attack, Brady succumbs to a coma and spends weeks in the local hospital. He awakens to answer questions from the detective, and in turn, learns that no one knows where his family is.

It turns out that the weird cult has been providing the rape 'em and grab 'em traveling gig for a long time. There are other survivors out there. Brady swaps his story with a woman named Ellen, and the two form a relationship that doesn't strictly focus on intimacy. Instead, Ellen shows Brady that he has psychic powers and proves to him that he can fight this menacing cult. With his newfound X-Men powers, Brady sets out to kill the cult and find his family.

This book had potential and started out fantastic. When Brady awakens from the coma, the author unfortunately shifted the novel from horror to fantasy, complete with long sections on spells, archaic rituals, and protection rings. It was like reading a card-playing game's tutorial on how to level up your character. These sections were tedious, dull, and lacked excitement. I was hoping for a cool hybrid of horror and action-adventure, but that wasn't the case. I was thoroughly unimpressed with Night Hunter.