"The Importance of Being Ernie" 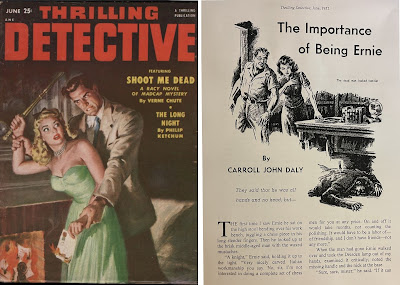 Carroll John Daly (1889-1958) is rightfully credited with inventing hardboiled crime fiction in the pulp magazines with his characters Three-Gun Terry and Race Williams. He also wrote his share of straightforward mystery stories, including “The Importance of Being Ernie” from the June 1952 issue of Thrilling Detective Magazine.

Our narrator George Norton befriends the local repairman, a reclusive old man named Ernie. George quickly learns that Ernie has a special gift that transcends his ability to fix broken lamps. When George summarizes any mystery novel while talking to Ernie, the old man can identify the murderer every time.

George is so impressed with Ernie’s armchair detective skills that he tells the local police and a local private investigator that they should utilize Ernie’s services to solve vexing crimes. However, neither of the professional investigators approached have any interest in indulging Ernie and bringing him on-board as a consultant.

A local murder springs Ernie into action and the cops get to see his Sherlockian skills of deduction up-close. Does he really have a gift or is there something else going on here?

This is a delightful little story with a couple great twists at the end and is definitely worth your time. It’s been scanned and made available on the internet for modern audiences — just Google the title and author. Alternatively, an outfit called Radio Archives has reprinted the entire magazine from that month and made it available for sale HERE.