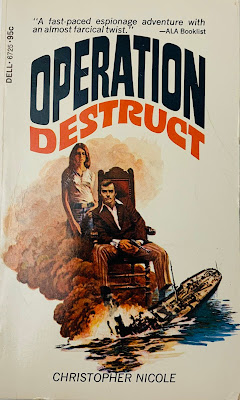 Christopher Robin Nicole (born: 1930), author of over 200 books, was born in Guyana and settled in the Channel Islands nestled between England and France. He wrote a three-book espionage series starring Jonathan Anders — all currently available as affordable ebooks — with the first installment being Operation Destruct from 1969.

Jonathan is a 23 year-old chess prodigy and skin-diving enthusiast in southern England. He works for an antiquarian book dealer that is actually a front for a secret counter-espionage agency of the British government. He’s a rookie operative who, as the paperback opens, hasn’t really been tested in the field. This is his first assignment.

The Ludmilla is a boat — a Russian trawler — that recently sunk in the English Channel in 30 feet of water with no recovered survivors. The intelligence service tasks young Jonathan with traveling to the island of Guernsey near the shipwreck to determine why a Russian fishing boat was there in the first place and what contributed to its sinking.

There’s a good likelihood that a British sleeper agent posing as a Soviet marine biologist was aboard the Ludmilla. The boat clearly contained Soviet secrets that sparked the shipwreck, and Jonathan’s assignment is to quietly learn the score. The setup for this one is a total pleasure, and the writing quality far surpasses a normal 180-page 1969 spy paperback.

Guernsey is an interesting setting for much of the novel. The island is located in the British territorial waters of the English Channel between England and France. It was German-occupied during WW2 and is filled with underground bunkers and fortifications like a honeycomb across the island’s eight-mile length. During the war, the Germans were expecting Guernsey to be the site of an allied invasion, but we opted to hold the D-Day festivities in Normandy, instead. The residents are known as Guernseymen, but that was 1969 — I’m sure there’s another term, now.

In a world filled with paperbacks starring self-assured, confident spies, Jonathan is a pleasure precisely because he is green, uncertain of himself, and wet behind the ears. He’s thrust into his first field assignment alone with only his wits guiding him to sink or swim (sometimes literally).

The book’s opening scenes and exciting conclusion are both awesome. However, there’s a good bit in the middle that was rather dumb and at times almost descended into parody. I’d still recommend the novel because the ending is so interesting and unlike other books you will read in the genre. Overall, Operation Destruct is an easy recommendation, and I look forward to the next book in the trilogy.