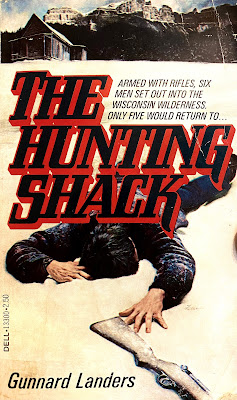 James Dickey's 1970 outdoor-survival novel Deliverance was adapted into a film by the same name in 1972. Both were widely successful and prompted numerous imitations. In the publishing world, it was books like Hunter's Blood (1977), Shoot (1973), Deer Hunt (1976), and Wilderness (1979) that carried out the suspenseful cat-and-mouse chase through the wilds of North America. These books typically challenged the American male, average or otherwise, with extreme, barbaric situations in the wilderness. There were a lot of 1970s books with this same premise, and I always try to pick them up when I spot one in the wild. Thankfully, I stumbled on The Hunting Shack, a 1979 paperback published by Dell authored by Gunnard Landers.

The book is set in the rural, icy landscape of a Wisconsin winter. Six average men venture into the wilderness for an annual, weeklong hunting trip. They have a small shack they utilize as lodging, and there's a rivalry between the men on who can land the biggest buck and drink the most alcohol. Midweek, the guys head to the closest town and bed down prostitutes as a way to escape the boring nine-to-five suburbia Hell. But, one of these six men does a little something different every few years.

Throughout the book's 220 pages, readers are thrust into the mind of Glenn, a dentist that joins his five friends each year for the hunting trip. But, Glenn journeys out on his own, away from the other hunters, and routinely kills another hunter. The narrative mentions two hunters being killed in the area in the past, and, as the book begins, Glenn is targeting another hunter. This time, his prey is one of his friends, an experienced hunter named Norm.

Author Gunnard Landers often used harsh, rural landscapes as a backdrop for his novels. Landers, a Wisconsin native, rancher and Vietnam War veteran, authored a series of books starring an undercover game warden named Reed Erickson. These books take place in places like Minnesota and Alaska. With Landers' skills as a storyteller richly embedded in this sort of sportsman escapism, The Hunting Shack excels in a lot of different ways.

The novel serves the survival-horror genre with its psychotic portrait of a deranged killer. The concept of a murderer among friends, collectively facing a rugged forest and snowy blizzard, was really entertaining. As a character study, the book centers on Glenn and Norm, two men who are both tiring of their tameness and bridled lifestyle. But, the book is also a wild and crazy look at a lot of stereotypical horny men just simply breaking rank and having a good time. There is a copious amount of sex and drinking, often graphic, as well as some of the typical juvenile banter between middle-aged hunting buddies. There is also a focus on two young prostitutes prospering with their good fortunes over the course of one sweaty, hot evening at the shack.

The end result is that The Hunting Shack was a pleasurable reading experience that provided plenty of escapism, and presented some fun, although disgusting, beer-belching deer slayers. The book's finale was worth the price of admission and, overall, certainly possesses a Deliverance vibe. Highly recommended.