Killinger #01 - Killinger (aka The Turquoise-Yellow Case) 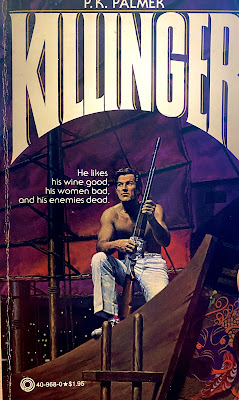 I read something online the other day that said Hell will be attempting to insert a USB into your computer for eternity. The catch is that no matter which side you place up, it will never properly fit. While that form of Hell would certainly warrant good behavior for a lifetime, I have a different version of Hell. It would require the condemned party to be placed on a small deserted island for eternity with an indestructible copy of Keith Parnell's paperback novel, and Hall of Shame inductee, Killinger.

The front-cover blurb of the 1980 Pinnacle version, placed cleverly beside a rifle-toting, fit-as-a-fiddle Steve Holland, says this about Killinger:

“He likes his wine good, his women bad, and his enemies dead.”

What it fails to mention is that the book is nearly 250 pages in length and that anyone subjecting themselves to one page of this nonsense will suffer unimaginable horrors. This is Roadblaster bad, which is the epitome of bad literature. Whether it slides into the fiction-abomination, smelly cesspool as that novel is in the eye of the beholder, or nose of the sniffer.

Jedediah Killinger III is retired and lives on a large yacht called Sybaris, docked in uneventful Santa Barbara, California. The boat has a secretary, a Japanese houseboy, 13 flavors of ice-cream, wood carvings of sexual positions, and lots of wine and fresh fish. In his spare time, he works as a maritime insurance investigator. Which brings him into an assignment to look into a shipping junk called Katja that was damaged at sea. Conveniently, the damaged vessel is docked near his own boat.

Killinger's investigation is basically just trying to bed down the daughter of the vessel's owner. He never leaves the dock area, has no actual purpose in the book, and just stands by eating, drinking, and partaking in intercourse with various characters. But, there's a heavy wooden crate on the damaged vessel and two people desire the crate.

The plot is so dull and boring that it pains me to even outline it here. Two criminals, K.Y. Smith and Count Vaclav Risponyl, both want the crate. But, they feel like they must steal the crate. Think of the old roadrunner and coyote cartoon. There's elaborate attempts to steal the crate, which requires a giant crane, that end in disaster. These attempts are unintentionally comical, convoluted, and completely uninspiring. It's like how a great action installment, like Executioner or M.I.A. Hunter, would have a plot like this for about a half-page just to further the actual plot. Unfortunately, Parnell uses this simple plot for a full 250 page novel.

Killinger should be avoided at all costs. It's tough, because Pinnacle released two versions, one in 1974 with a different cover and title as The Turquoise-Yellow Case, obviously cashing in on John D. MacDonald's nautical private-eye series Travis McGee and its color-coded naming convention. The 1980 version is simply Killinger. To add lemon juice to the wound, there is a second Killinger novel called The Rainbow-Seagreen Case. Essentially, three opportunities for you to have a Hellish reading experience. Stay alert in the book stores for this literary danger. Handle with care. See something, say something.