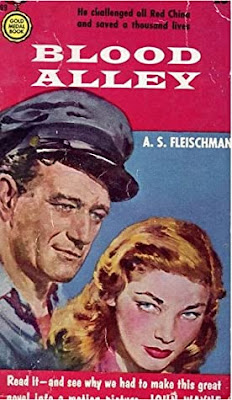 In 1955, Blood Alley was simultaneously published as a novel and released as a film by Warner Brothers. The premise is that a U.S. Merchant Marine named Wilder is freed from a Chinese prison by a village hoping to utilize his services to escape to British-controlled Hong Kong. The book was authored by A.S. Fleischman, a popular Fawcett Gold Medal writer who specialized in exotic Asian locales to place his action-adventure novels like Shanghai Flame (1951), Malay Woman (1954), and Danger in Paradise (1953). The book was considered “cinematic”, thus Hollywood gained a copy of the book prior to its release and agreed that Blood Alley would be a great film. Fleischman was asked to write the screenplay, thus both formats were released simultaneously.

Thankfully, Stark House Press has published a majority of Fleischman's novels, including Blood Alley, which is out now through the subsidiary Black Gat Books.

The book is a nautical adventure tale as protagonist Wilder captains a steamship through a perilous coastal waterway. In the book's beginning, Fleischman is liberated from a long stint in a Chinese prison. The first few chapters focus on the escape, the journey to the village, and his days spent as a clandestine village local. Wilder learns that the village, through bribery and firepower, were able to spring Wilder, but at a price. Wilder is to transport the villagers to Hong Kong, an island that was controlled by the British government for 99 years (which reverted back to China in 1997).

Fleischman inserts a romantic connection for Wilder in the form of Cathy, a British woman who is anticipating that her father, the village doctor, will be able to join Wilder's quest for freedom. Part of the book is the build-up to learn of the doctor's fate and the impact on Cathy's choice to continue the trek to Hong Kong. The voyage is ripe with gunfights, patrol boat chases, and conflicts on the ship as Wilder is placed in a number of territorial and village disputes. The largest portion of the novel has Wilder battling his own ship, a relic from a bygone era that is forced to do the impossible.

Despite the fact that Blood Alley was a Hollywood flop, even with iconic John Wayne as the star, Fleischman's novel is a better representation of the story. It's a short, fast-paced novel that doesn't necessarily rely on a lot of characters and backstory. I enjoyed Wilder as the narrative's main star, but the chemistry with Cathy was an enthralling, enjoyable element. Nautical-fiction fans won't be disappointed with the plot's development. It's a sequence of terrific visuals that offers up the breathtaking escapism that the genre demands. That alone makes Blood Alley an easy recommendation.