The Cop on the Corner 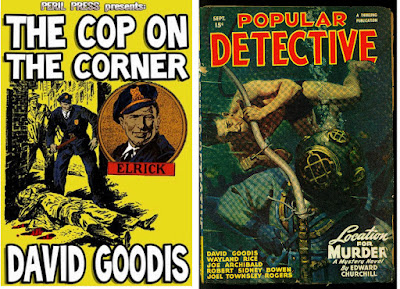 Before becoming a mainstay of grim, noir fiction in the paperback original era, David Goodis (1917-1967) was a prolific writer of short stories for the pulp magazines. A handful of these early works has been digitized for modern audiences, including “The Cop on the Corner” from the September 1947 issue of Popular Detective Magazine.

Elrick is a tubby beat cop who spends most of his time on foot patrol loafing and chewing the fat with his friend who runs the newsstand on the corner. One day, their eternal conversation is interrupted by a couple kids who just found a dead body riddled with bullets in a nearby alley. Elrick immediately recognizes the corpse as a local gangster whom Ekrick knows from way back when the racketeer was a lowlife juvenile delinquent running the streets with criminal abandon.

Because of Elrick’s unique knowledge of the dead mobster’s history and associates, he hatches a plausible theory regarding the identity of the murderer. This presents the corpulent copper with an idea to solve the case himself, which will likely earn him a raise and a promotion to the Detective Bureau.

Elrick’s investigation takes him to a skid row alcoholic dame who he believes provides a key to unlocking the mystery of the dead hoodlum. Of course, none of this is as easy as it seems, and Elrick’s fallibility as an investigator leads to a well-crafted scene of bloody violence and a twisty solution.

The plot twist punchline was typical of the endings seen a decade later in the pages of Manhunt, a crime digest that printed several Goodis stories and novellas. “The Cop on the Corner” remains a fantastic read that shows Goodis at the top of his short story game before moving to longer works. If you can score a reading copy, you’ll be happy with your decision.

For reasons unclear to me, “The Cop on the Corner” is not available on Amazon, but it is available at Barnes & Noble for the hundreds of people on earth with Nook devices. There are also scanned and transcribed copies floating around the internet, including HERE.