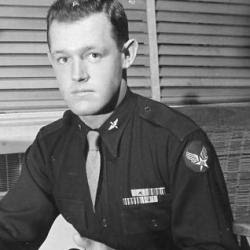 There is already a lot that can be said about Howard Hunt. He was both a WW2 veteran, a spy, a Hollywood screenwriter, war correspondent, and a criminal. His life has been fictionalized by the film industry, his exploits chronicled by numerous non-fiction books about the infamous Watergate incident, and his possible involvement in the assassination of U.S. President John F. Kennedy. Even Hunt himself wrote non-fiction books about his own life. While all of these things are fascinating, the purpose of this Paperback Warrior Primer is to examine some of his literary highlights. You can dig the hole deeper through any number of other resources. He authored at least 88 novels, most featuring lurid covers that we appreciate.

Everette Howard Hunt Jr. (1918-2007) was born in Hamburg, New York. He attended the prestigious Brown University and later began writing for Life as a war correspondent. Later, Hunt joined the Navy, serving on the USS Mayo during the early days of WWII. After, he went to the Army Air Corps and then finished his military stint with the OSS, the nation's wartime precursor to what is now known as the CIA. Beginning in 1949, Hunt was an officer for the CIA, performing 21 years of international counter-intelligence until 1970. During this entire time, Hunt was writing novels. 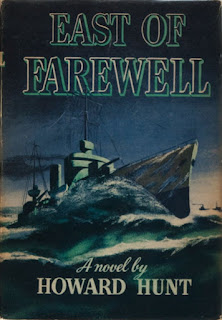 His first book was East of Farewell, published in hardcover by Alfred Knopf in 1942. The book reads like a true biography as Hunt recounts the day-to-day life upon a Fletcher-class destroyer. Hunt also used his Army Air Corps experience to write his second novel, Limit of Darkness. It covers a single 24-hour period in the "life" of a Navy torpedo bomber squadron on Guadalcanal in 1943. With the success of these two novels, Hunt won the prestigious Guggenheim Fellowship, which provided him a grant to help fund his writing career and provide blocks of time where he can pursue his art form.

During the 1950s, paperback original novels became extremely marketable by publishers. Hunt was in the perfect position to take advantage of this publishing craze by writing and selling a lot of books under his name and various pseudonyms.

As John Baxter, Hunt authored the two novels A Foreign Affair and Unfaithful in the mid-1950s. 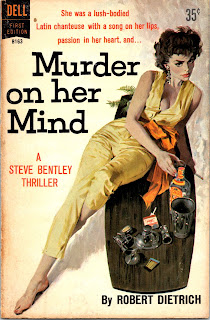 Using the name Robert Dietrich, Hunt authored 12 total novels, but 9 of these make up the Steve Bentley series. Hunt produced nine series installments between 1957 through 1962 as Dietrich. He revisited the series in 1999 under his own name with one additional installment featuring the titular hero at an advanced age. In the novels, Bentley is a Washington D.C. accountant that stumbles into a lot of crime inside the Nation's Capital. Mostly, these crimes are solved by doing favors for clients or business associates. But often, they just conveniently appear in strip clubs, bars, and even by the roadside. Bentley is easily likable and shares a lot of stereotypical genre tropes with the popular private-eyes of the era - he drinks a lot of alcohol, engages in various relationships with women, owns a boat, former military, and can fight, shoot straight, and speak the truth. Paperback Warrior has a number of reviews about the series HERE. Some of the Steve Bentley books have been released in brand new editions by Cutting Edge Books, including an ebook omnibus containing a majority of the series. Cutting Edge also offers the stand-alone Dietrich novels One for the Road, Be My Victim, and The Cheat.
1. Murder on the Rocks (1957)
2. End of a Stripper (1959)
3. House on Q Street (1959)
4. Mistress to Murder (1960)
5. Murder on her Mind (1960)
6. Angel Eyes (1961)
7. Curtains for a Lover (1961)
8. Calypso Caper (1961)
9. My Body (1962)
10. Guilty Knowledge (1999, as Howard Hunt) 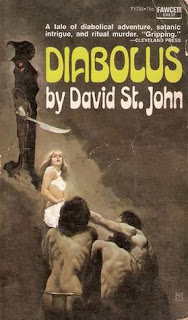 As David St. John, Hunt authored a nine-book series starring CIA operative Peter Ward. These books were published between 1965 through 1971, and then later were reprinted under Hunt's own name in the 1970s to capitalize on his newfound fame connected with Watergate. In this series, Ward is helping Soviet scientists defect, dodging enemy assassins, chasing sensational cults, and investigating assassinations of foreign leaders. It's stereotypical spy-fiction of the era, but enjoyable nonetheless. Hunt also used the David St. John pseudonym to author the 1972 novel The Coven, a stand-alone thriller about a Washington D.C. attorney navigating witchcraft and murder.
1. On Hazardous Duty (1965)
2. Return from Vorkuta (1965)
3. The Towers of Silence (1966)
4. Festival for Spies (1966)
5. The Venus Probe (1966)
6. One of our Agents is Missing (1967)
7. The Mongol Mask (1968)
8. The Sorcerers (1969)
9. Diabolus (1971)

Hunt's Gordon Davis works are all stand-alone novels. Paperback Warrior reviewed Where Murder Waits HERE and Hard Case Crime reprinted House Dick in 2009 using the name E. Howard Hunt. A majority of the Gordon Davis paperbacks were reprinted by various publishers under Hunt's name, once again to capitalize on Watergate. 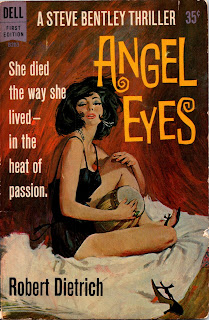 In 1972, President Richard Nixon was running for re-election. A group of men beholden to the President was caught burglarizing the Democratic National Committee headquarters – President Nixon’s opposition party – at a hotel called The Watergate in Washington, DC. One of the burglars caught was Howard Hunt. It became known as the Watergate Scandal and one of the central questions was: What did the President know about this burglary and when did he know it? The burglary led to the resignation of President Nixon. Howard Hunt, among others, was incarcerated for his part in the burglary and served 33 total months in federal prisons in Pennsylvania and Florida. While in prison, Hunt suffered a minor stroke.

The prison stint did not dampen Hunt's literary career. If anything, it improved his sales. Publishers were able to list a front-cover blurb that connected the author's name with one of the greatest scandals in U.S. history. Once he was released from prison, Hunt began writing consistently, but also realized that his prior pseudonyms were being converted to his real name. 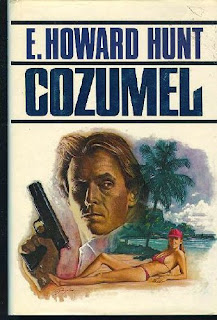 On January 23, 2007, Howard Hunt died from pneumonia in Miami. He is buried in Prospect Lawn Cemetery in Hamburg, New York.

You can read all of our Howard Hunt reviews and listen to a podcast episode dedicated to the author HERE.