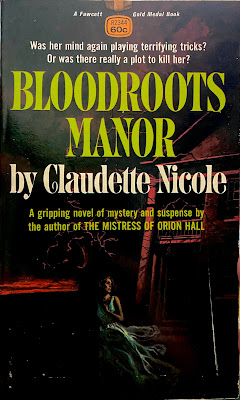 Author Jon Messmann cut his teeth writing for the Golden Age of Comics before moving into full-length novels. At the height of men's action-adventure fiction, Messmann created and authored the vigilante series The Revenger, the Travis McGee-styled Logan books, and the enormously popular adult western series The Trailsman. But, Messmann also capitalized on the gothic paperback craze of the 1960s and 1970s. As Claudette Nicole and Pamela Windsor, Messmann authored a number of gothic mystery and romance novels for Fawcett Gold Medal and Pyramid. Cutting Edge Books has published a number of Messmann titles in new editions, including his gothic paperbacks like Bloodroots Manor. It was originally published by Fawcett in 1970 and has been out of print for more than 50 years.

Nancy Hazleton married a man named Dirk and the two set off for a “happily ever after” life in New York. But, Dirk refused to become intimate with Hazleton and often placed her in audacious stunts to impress his friends. In a wild chain of events, Nancy realizes that Dirk has been attempting to murder her throughout their short marriage. During a life or death struggle, Nancy escapes Dirk's wrath and he plunges to his death. Nancy is placed into a mental hospital to rehabilitate.

After regaining her mental stability, and working through her horrendous past, Nancy becomes enrolled in an interior design school. Upon graduation, Nancy is hired by a man named Samuel Howell to redesign his spacious country house. As the book begins, Nancy is riding a train to Deepwell Junction in the rural mountains of Kentucky. When she arrives late at night, she is shocked to discover that Deepwell Junction's train station is an abandoned husk. Further, the directions leading to Howell's estate lead Nancy to a large abandoned house that's severely damaged. To escape a thunderstorm, Nancy takes shelter inside of the old dwelling. In a terrifying sequence, a horribly disfigured man emerges from the shadows and attacks Nancy in the house. She attempts to escape through the forest and collapses. Is this a nightmare or reality?

At 150 pages, I read Bloodroots Manor in one sitting. Messmann was such a craftsman and he builds this narrative into a crescendo of mystery and white-knuckle suspense. Nancy's exploration of the mysterious town, the Howell family legacy, and her relationship with a local historian all add small ingredients to the much larger mystery. Messmann conveys a real sense of isolation and panic as Nancy contends with the idea that she may have been lured into a deadly trap. Each chapter felt like one more step to some grisly discovery.

If you love the traditional, atmospheric haunted house tale and the “evil thing down the hall” type of storytelling, then Bloodroots Manor is an easy recommendation. With its cursed heirs, family secrets, phantoms on the hillside, and cavernous mansion, this one has everything we all love about the old fashioned gothic novel.