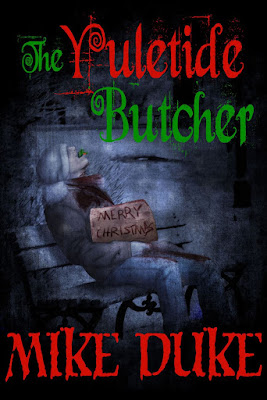 According to his Amazon bio, author Mike Duke was a police officer for 12 years and now instructs military, law enforcement, and bodyguards blade and hand-to-hand combat techniques. He's a fan of horror and science-fiction, which I assume led to his love for writing it. In 2021, he launched a three-book series of science-fiction novels called Amalgam. His horror books include Crawl, Ashley's Tale, and Low. My first experience with the author is his Christmas-themed horror novella The Yuletide Butcher, released in 2021.

For 20 years a killer nicknamed “Yuletide Butcher” murders a random person in Detective Rick Allen's city (Allen with two arms, not one). The killings are innovative and feature a calling card. The killer places holly leaves in one of the body's natural, or newly created, orifices. This year, the city has called in an FBI agent to review Allen's most recent profiling in hopes of avoiding another senseless murder.

While all of that is sorting itself out in the narrative, the author also has another storyline fashioned about a jaded suburbanite family man that becomes mentally unhinged. Jack Randal engages in a heated argument with his wife at a nearby shopping mall. He leaves the wife and kids and checks in at a hotel with his favorite hooker. After numerous sex romps, mostly off the page, Randal comes up with an idea.

The day before Christmas Eve, he breaks out his fake ID (that he just happened to reserve for this very occasion) and meets with his accountant to transfer all of his money to an offshore account so it can't be traced. Together with his tramp, the two can go to Cambodia and live it up exploring exotic temples. But, he has some baggage to sort through that may involve killing a family, staking their corpses on the lawn, and then burning down their house. Could this Jack Randal crazy family man be the Yuletide Butcher? Can Detective Allen and a stereotypical idiot FBI agent trace the clues?

This 55-pager isn't fantastic by any means. In fact, it is just downright stupid at times. Like the police officer asking Randal's wife if they can check her spouse's credit report and credit card transactions. How, or why, would she have anything to do with providing permission? Or, the FBI agent shocked to discover that the detective actually used profiling techniques to narrow down the suspect list. Or, the entire investigation halting because Randal's “basement door” is locked and there's no key. Or that the guy is paying for dirty movies on PPV at the hotel. Who does that in the 21st century?

However, as a kooky horror tale loaded with violence and horrific outcomes, The Yuletide Butcher is still a wildly good time. Think of it as watching a late Friday the 13th installment – you suspend disbelief to have a good time watching people maimed and knocked off in savage style. If you can do that, and not be offended by grotesque brutality, then these 55 pages will just fly by and you'll ask for a sequel. So, Mr. Mike Duke, is there a sequel? Please take my money, or at the very least show me where that life-size Alien Xenomorph statue is from the book's biography page.