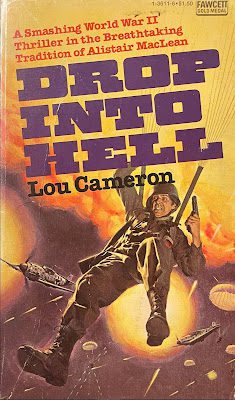 Lou Cameron (1924-2010) mastered so many genres of written entertainment from comic books to westerns to mysteries and so on. Drop Into Hell was a 1976 WW2 combat adventure “in the breathtaking tradition of Allistair MacLean” released by Fawcett Gold Medal.

The year is 1944 and Paratrooper Captain David Evans has been given a secret mission. Hitler has developed a new super-tank and fighter jet that could cause some real problems for the Allied Forces. The plan? Hit Germany’s fuel refinery capabilities, leaving the Kraut’s new war machines with their gas tanks on empty.

The specific target is a refinery that shares space with a Red Cross Hospital housing injured American and British POWs. Conveniently for the novel, the hospital/refinery is right next door to a Concentration Camp filled with Jews and Gypsies working as slave labor in the refinery. Bottom line: Bombing the refinery into the stone ages isn’t an option.

Enter Paratrooper Dave and his crew of commandos, which includes the mandatory American Indian soldier. Their mission is to parachute into Nazi turf, sabotage the refinery, and get back across the lines safely into the warm embrace of the Allied forces. The problem? No one really has any idea how to get the saboteurs out of Germany once the damage is done.

The entire paperback is a very smooth and easy read as the cast of characters tackle problems and obstacles along the way. However, the novel‘s action lagged a bit in the middle. For my money, I think Len Levinson’s The Sergeant series is a stronger choice, but if you’re looking for Allistair MacLean Lite, this paperback will more than suffice.