Conan - The City of Skulls 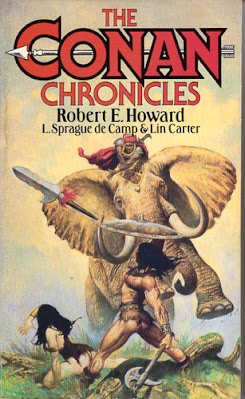 In the very first edition of the Lancer Conan (1967) paperback, the table of contents lists a Lin Carter and L. Sprague de Camp story “Chains of Shamballah”. But, on page 189 the story title appears as “The City of Skulls”, and in future editions of the book, both the TOC and page 189 both lists “The City of Skulls”. It's one of those oddities in Conan literature. But, drilling down to the review of the story, this is only one of two stories in Conan that is authored by both Carter and de Camp. The other story is “The Thing in the Crypt”. All of the remaining stories in the collection are combinations of Robert E. Howard/Carter or de Camp. The story is also included in Sphere's 1989 omnibus The Conan Chronicles (pictured).

Like “The Hand of Nergal”, Conan is serving as a mercenary soldier for Turan's military. His detachment has been assigned the duty of escorting Princess Zosara to her wedding date with a powerful nomad. As the entourage crosses the plains at the base of a large, and snowy, mountain range, they are overrun by a tribe of savage warriors. Conan's entire squad is massacred, leaving him with two survivors, his friend Juma and the Princess Zosara.

In an epic, short-lived 20ish pages, the three are forced through bitter cold winds, across the mountains, and into a warm jungle environment called Shamballah, the City of Skulls. It's here that Zosara is promised to a Toad-God-Thing named Jalung Thongpa and Juma and Conan are sold into slave labor aboard a ship. In a violent, brutal struggle, Conan is forced to row for days as he's whipped by a slave master and nearly starved. In an upheaval, Conan and Juma escape the ship and head back to save Zosara.

In a book that contains Howard classics like “The Tower of the Elephant” and “Rogues in the House”, I'm surprised at how much enjoyment the two Carter/de Camp stories brought me. “The City of Skulls” feels epic, which is really impossible considering it's 33 pages. The story locations are described so well and thrust these characters – unwillingly – into the heart of madness with high altitudes and low temperatures. Mix in the ruthless rowing expedition as testaments to Conan's internal fortitude to soldier on. That's why we read these harrowing adventure tales. Carter and de Camp can tell a great story and I feel like “The City of Skulls” is a worthy addition to this stellar Conan collection. Recommended.

* An interesting addition to the story is the introduction of a regular character in Juma. His backstory is explained in detail, placing him on the same path as Conan in terms of tragic childhood and harsh lessons in the terrifying wastelands of the Hyborian Age. Juma is featured in both Conan the Buccaneer and Conan the Hero novels. I believe he is also featured in many issues of Conan the Barbarian and Savage Sword of Conan.

** “The City of Skulls” was adapted into comic form in the Savage Sword of Conan #59 and very loosely in Conan the Barbarian #37.

*** The Conan: The Adventurer animated television show used a portion of this story, specifically the "Ship of Blood" chapter for Season 1/Episode 2/"Blood Brother". The episode was written by Christy Marx, who had previously provided comic writing for Red Sonja, Conan the Barbarian, and Savage Sword of Conan. The show swaps out the story's character of Juma with an ongoing character named Zula.