The Caretaker of Lorne Field 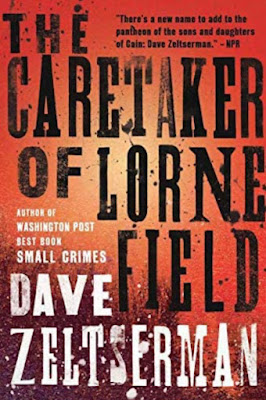 Dave Zeltserman, (born: 1959) is a highly-regarded contemporary noir author from Boston who’s won a Shamus award and critical acclaim for books written under his own name and his Jacob Stone pseudonym. His 2010 novel, The Caretaker of Lorne Field, is a departure into the world of horror and dark fiction.

Jack Durkin receives $8,000 per year and a free shack to pull the weeds at Lorne Field. It’s a seemingly simple job for a simple man, but Jack is convinced his job is saving the world. For over 300 years, the men of the Durkin family have held the same job, and it used to be a highly-respected position revered in the town for the heroism and sacrifice the task entailed. Nowadays, Jack is treated as an oddity or a joke.

Jack and his ancestors are convinced that these aren’t any ordinary weeds. He believes that they are monsters known as Aukowies. If permitted to grow to size, they will uproot and take over the world. Back in the 1700s, the town entered a contract with the Durkin family to have the oldest son weed the field daily killing all the baby Aukowies that pop up through the earth - seemingly as weeds. Jack is still a believer in the importance of his job, but no one else seems to believe anymore, including his wife and eldest son.

The idea of killer plants has been explored before in fiction — Day of the Triffids, The Ruins, Little Shop of Horrors — but the author sprinkles ambiguity throughout the book, so the reader is never quite sure (until the end) if the weeds are aliens or if Jack is suffering from a generational delusion. Contemporary horror author Paul Tremblay also plays with that same ambiguity in his fiction to similar effects. Is this supernatural horror or a novel about collective mental illness?

This is an easy-to-read and fascinating book about man vs. monsters, but also about the power of faith and traditions. What happens when society stops believing in the stories we’ve told ourselves for generations to explain our illogical behaviors? The paperback may have worked better as a tight novella, but I was generally pleased throughout the novel’s entirety. Recommended.