The Best of Manhunt #04 - The Jack Ritchie Stories 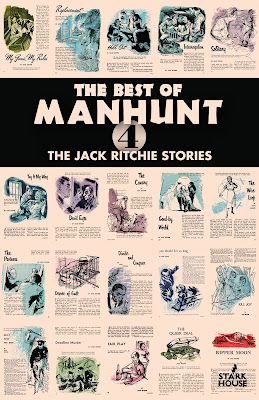 In this fourth volume of stories from Manhunt, the good folks at Stark House Press took a different approach by focusing on a single author, Jack Ritchie. If you’ve never heard of Jack Ritchie, consider it further evidence that short-story writers don’t get the respect and adoration lavished upon novelists.

Jack Ritchie was the prolific pseudonym of Wisconsin native John G. Reitci (1922-1983). During his career as an author, he sold countless stories to publications including Manhunt, Murder!, Alfred Hitchcock’s Mystery Magazine, Mike Shayne Mystery Magazine, The Saint Mystery Magazine and on and on. To my knowledge, he never wrote a novel - short works were his specialty.

As Paperback Warrior fans are well aware, Manhunt was the premier fiction digest for hardboiled, noir crime stories in the 1950s and 1960s, and Ritchie began selling his grittiest work to Manhunt in 1954. In total, Manhunt published 23 of Ritchie’s stories through the year 1965.

Let’s sample some stories and see if this guy is the real deal.

A slumlord is forced to pay protection money to a local mobster. When he refuses, his buildings start mysteriously catching fire. The crime boss has also taken over the local gambling racket as well as the politicians and police force. A coalition of displaced leaders wants the thug gone, and approach our narrator Johnny to make it happen. Johnny has his own reasons for wanting the crime boss eradicated. This was Ritchie’s first sale to Manhunt, and it’s outstanding.

As with most of Ritchie’s stories, this one opens in the middle of the action. Ed and his partner have kidnapped a guy named Pete with the intention of holding him for ransom. Pete’s boss is a nightclub owner and may be willing to pay fifty grand to get his right hand man back in one piece. This story has a nasty twist you won’t see coming until it hits you like a gut punch. Top-shelf stuff.

An assassin arrives at the narrator’s house. It’s abundantly clear that his much younger wife commissioned the hit. Despite the unusual circumstances, the interaction between the victim and his soon-to-be-murderer is surprisingly cordial and businesslike. The patter is so alluring that you may not even see the double-cross coming. Another solid entry.

Ritchie’s final appearance in Manhunt finds the narrator on a urban building ledge prepared to jump while a police sergeant tries to keep him talking. The poor copper didn’t ask for this assignment. He was just walking by the building at the wrong time. The comedic back and forth between would-be-suicider and would-be rescuer is a stitch as the men compare their problems and failures. Another winner with a fun ending.

This superb collection is proof positive that Jack Ritchie was a master of the hardboiled short story game. His work exemplifies everything that made Manhunt great, and this compilation should go along way toward cementing his legacy as one of the greats.