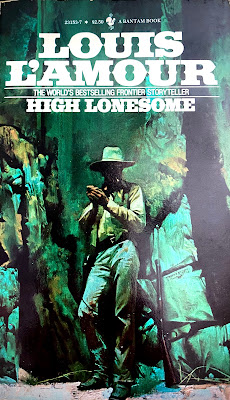 High Lonesome, a 1962 stand-alone novel by Louis L'Amour is a “chase the chasers” western. It's a rarely used formula where a rider, or group of riders, is chasing after a group that is chasing after someone else. In this novel, L'Amour turns the concept on its head by including one more group of chasers. In essence, it's the posse chasing the chasers who are running down the chasers. I'll sort this out for you, and by the end you'll be wanting to read it. Trust me.

The novel, set in the American Southwest in 1881, begins with one of my favorite aspects of western storytelling, the old bank-robbing bit. Considine is the main character, a fast-draw specialist that's an outlaw. He has a four-man heist crew knocking over banks and cracking safes. The first few pages feature a robbery in progress that leads to just a few bucks. So, the foursome form a plan to head to Considine's former hometown to knock over the bank there and to even the score with an old friend that's become the sheriff.

To balance out the criminal protagonist, L'Amour introduces an older outlaw named Dave Spanyer and his adult daughter Lennie. Spanyer has decided to become an honest man, and with his daughter the two plan to cross the barren desert wastelands to California to begin a new life. However, they run into the bank-robber group and Lennie immediately falls for Considine despite her father's disapproval. It's in this town that Considine's men rob the bank and head out of town with a ton of cash. A posse immediately gives chase, pushing Considine into an unusual mindset.

Considine realizes that Spanyer and Lennie are surely going to be tracked and killed by an Apache war-party. So, he heads the group in that direction to contend with the Apache nation rather than fleeing over the border into Mexico. So, we circle back to the formula presented in my opener – the posse chasing Considine's crew while they pursue the Apache warriors who are chasing after Spanyer and Lennie. Got it?

Sometimes L'Amour's stories can be so basic that they border on complacency. But, High Lonesome is damn near perfect. There are so many stories weaved into this tale – the old outlaw (Spanyer) witnessing the next generation of outlaws (Considine's crew) commit to a life of crime, a life he wants to escape and forget. Lennie's attraction to Considine could be a realization of her love for her father, a need to be protected by a man with no laws. Considine's feud with his old friend is a story unto itself, which plays out nicely in the finale. Additionally, there's the question of Considine himself going honest after facing so many struggles as a criminal.

In terms of action, it doesn't get much better than this. The last 40 pages are an absolute barnburner as Spanyer, Lennie, and Considine's gang make a final stand on top of High Lonesome, an old outlaw hideaway nestled in the steep rocky cliffs. Kudos to L'Amour for bringing in the rifles and allowing them to outweigh six-guns in the novel's final fight. I love a great six-gun showdown, but something about the long rifle always appeals to me in westerns.

High Lonesome is one of the best vintage books I've read this year (2022) and an absolute must-read for any western fan. With its interesting blend of personal redemption, captivating life choices, gunfights, and assortment of heroes and anti-heroes, the narrative never becomes uninspiring or dull. It's a real treat when L'Amour is “on” and he was on fire for this one. Highest recommendation.