The Pursuit of Agent M 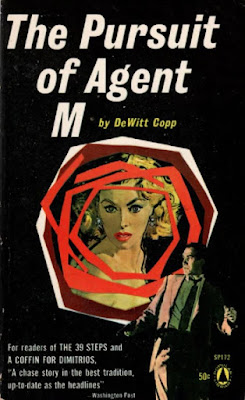 DeWitt Samuel Copp (1919-1999) authored fiction and nonfiction books with themes relating to military history, aviation, the Cold War, and espionage. His experience in the Army Air Corps during WWII, and role as a flight instructor pilot provides a unique realism to his writing. Copp also served in the Central Intelligence Agency and taught history and civics at St. Luke's School in Connecticut.

Copp's literary work includes Notebooks, a three-book series of action-adventure novels written under a pseudonym of Sam Picard. As Nick Carter, Copp authored two novels in the Nick Carter: Killmaster series. The talented writer penned a screenplay for an episode of One Step Beyond, a Twilight Zone-esque anthology show on ABC and scripted episodes for other television programs like Three Musketeers, Kraft Theatre, and Lux Video Theatre.

His spy-thriller The Pursuit of Agent M has been recently released in a new edition by Cutting Edge in digital and physical formats. The book was originally published as a hardcover in 1961 by Hammond and in paperback by Popular Library a year later. It has remained out of print until now.

Agent M is Mark Costain, an American spy working for the CIA under the name Mark Vorak. His cover is that he is an engineering director at a Czechoslovakian company that manufactures rockets and missiles. In the time-period of the book's release, Czechoslovakia was a communist country controlled entirely by the very red Soviet Union.

When readers first meet Costain, he is desperately struggling through the cold, harsh landscape of Czechoslovakia attempting to reach the freedom of the Austrian border. In close pursuit is the Czech military, who have positioned Costain as Public Enemy #1. Considering the novel is a man-on-the-run suspense-thriller, the book's simplistic title is perfectly fitting. 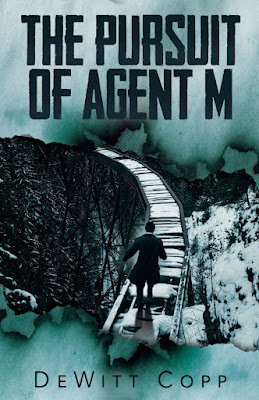 The Pursuit of Agent M is presented in four acts that feature Czech characters aiding Costain's escape. In the first act, Costain meets an old man tending to his sheep. The brief relationship examines Costain's confession that he was stealing government secrets. The wise old man, who hides Costain from the military, doesn't chastise Costain over killing a police officer. Instead, the old man is infuriated over Costain's “theft” of government intelligence. This surprising response to theft versus murder is an intriguing debate.

Costain's second meeting is with a poet-philosopher that lives in a one room apartment. The poet insists that he isn't Costain's enemy and allows him safe harbor with food and rest. The only repayment requirement is for Costain to hesitantly listen to the poet's readings asking for praise. When the poet risks death for Costain's getaway, Copp's narrative is morally uplifting, showing readers a most basic human principal.

The third act, and arguably the most exciting, features Costain's hostage, a woman that is revealed to be the mistress to Krupina, a Czech official coincidentally leading the manhunt to find Costain. This sequence is a fevered, tight-laced portion of Copp's narrative that focuses on the woman's relationship with Krupina, and her efforts to assist Costain as a way to extract revenge on her lover. These events are central to a rural farmhouse with plenty of cat-and-mouse tactics between Costain, Krupina, and the mistress that they both are relying on. It's a brilliant premise that leads to Costain's retrieval of an aircraft, that eventually leads to disaster.

The book's final act is a resounding resolution that introduces key characters that are paramount to Costain's original mission in Czechoslovakia. The characters include a young woman, Lisa, that shares a romantic chemistry with Costain. It's this satisfying conclusion that breathes a new life into the story, revealing Costain's experiences during WWII, both as a pilot and a prisoner-of-war. The circle becomes complete as Copp presents a roaring sequence of events that spring from a treacherous doctor and his association with the communist government. It's a unique twist on the story relevant to Costain's employer and the horrifying atrocities committed while serving as an undercover agent in the German Gestapo.

The Los Angels Times said, “The writing and style of the book are superior”, when reviewing The Pursuit of Agent M. I would wholeheartedly agree with their praise as Copp's writing was certainly unique, charismatic, and often endearing. The book, rightfully categorized as a spy-thriller, contains a remarkable amount of emotion - human endurance, philosophy, the consequences of war, moralistic thinking, and personal indebtedness. It's a mature approach to the old-fashioned Cold War, espionage thriller that leaves a strong, noticeable effect on readers.

As a casual, man-on-the-run story, the novel can be enjoyed as pure escapism, but it would be a travesty to ignore Copp's fundamental, underlining messages sprinkled throughout his work. It really sets him apart from his other military-fiction and espionage contemporaries of that era in a Hemingway style – invigorating circumstances propelling human need and suffering. Whether there is a happy ending is in the eye of the beholder.