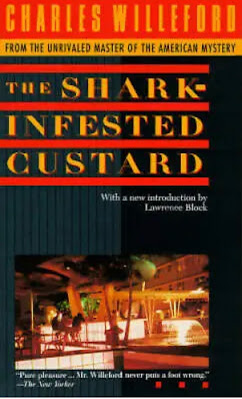 The book is set in a Miami singles-only apartment complex with a pool where four dudes — each around age 30 — hang and drink vodka martinis from Dixie cups. In short, it’s a great town to pick up chicks in a target-rich environment. Each of the four main characters gets a featured section of the book, which consists of four largely stand-alone noir novellas about these swinging guys.

Our first narrator is Larry Dolman, an ex-cop working in the business office for a big PI firm. He and his horny rat pack spend a lot of time strategizing about how to get laid most efficiently. One of these excursions opens the door to a real dilemma when one of the fellows picks up an underage girl and she dies of an overdose in his car. The guys then bumble into a murder they are generally unequipped to handle. All of this is played for laughs in a dark, comedic tone - think Donald Westlake meets Weekend at Bernie’s meets Quentin Tarantino.

The second narrator is a pharmaceutical salesman named Hank, who has been seeing a married woman. When someone takes a shot at Hank, he can only assume it’s her husband. As the attempts on Hank’s life escalate, we get an interesting look at the job of a legal drug dealer and the nuances of the career. It’s another great story with a tidy ending that brings all the plot threads nicely together.

The third novella follows mostly Don, the Florida sales rep of a British silverware manufacturer, in his attempt to heist his employer’s inventory and get away scot-free. It’s a story that could have been slightly edited to fit in quite nicely with Manhunt or any other purveyor of edgy crime fiction.

Lastly, the boys are back together again reflecting on the drama of the other stories and the fallout of their decisions when a sexual encounter takes a very dark turn.

I was completely delighted by these four stories, yet the consensus among reviewers is that is a below-average effort for Willeford. Let’s be clear: I’m right and they’re wrong. These are four dark, humor-filled crime stories about guys whose inability to control their libidos get them into hot water. Willeford’s writing is predictably awesome, and he’s funny as hell. Okay, the book’s title is staggeringly stupid, but the contents inside are four aces.