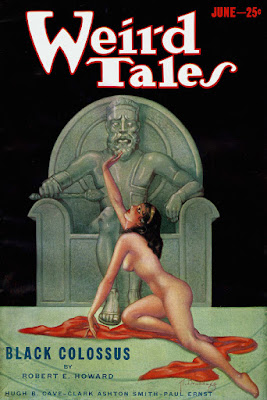 “Black Colossus” is a Robert E. Howard story starring Conan the Cimmerian. It originally appeared for the first time in Weird Tales, June 1933. It was reprinted in the 1954 Gnome Press collection Conan the Barbarian with edits made by author L. Sprague de Camp. The website spraguedecampfan points out that de Camp's edits were very minor. Additionally, the de Camp's edited version appeared in the Lancer collection Conan the Freebooter (1968) and subsequent printings by Sphere, Prestige, and Ace. Howard's original version, without de Camp's edits, appeared in Black Colossus (1979), The Conan Chronicles Vol. 1 (2000), Conan of Cimmeria Vol. 1 (2003), and The Weird Writings of Robert E. Howard Vol. 1 among others.

Shevatas is a legendary thief that readers are introduced to in the early pages. He possesses a special combination that will open a long sought after room in an ancient, abandoned Stygian temple. Once inside, Shevatas is nearly blinded by the glare of gold, silver, and heaps of diamonds. But, a recurring theme in Howard's books, is that the thief never gets the precious goods. In this case, a primeval Stygian sorcerer named Thugra Khotan awakens from a 3,000 year slumber and readers are left to their own conclusions that Khotan kills the thief.

By saying his last name backwards, Khotan takes on the name Natohk (clever, right?) and begins building an evil empire. He crushes and conquers Hyborian nations one by one, amassing their armies into his. The next destination is Khoraja, a country that is led by a brother-sister combination. The king becomes a prisoner in nearby Ophir and the queen, a beauty named Yasmela, hits the streets and pubs seeking a new military leader based on the wisdom she receives from her god Mitra.

Yasmela, spiritually guided, locates a very drunk Conan at a local bar and convinces him to follow her back to her family's castle. There, she offers Conan the job of leading her royal armament, military, and commanders into a fierce battle with Natohk's controlled forces. A Lord Thespides (a general), is shocked by Yasmela's choice in Conan. Thespides defiantly contends Conan's leadership, but the entire military might of Khoraja soon arrives at the Well of Altaku to battle Natohk's forces. In grand fashion, the field of battle spills onto the page as Howard describes the chaos of the fight and the technical aspects of this confrontation.

“Black Colossus” is a near-masterpiece of extraordinary battle scenes, large-scale invasion, and a classic showdown between Conan and the evil Natohk. Howard's imagination runs wild with vivid imagery, exceptional descriptions of these barbaric, iron-clad warriors, and a sense of quick plot development considering the short length. I can imagine “Black Colossus” as a full-fledged 500+ pager.

There are a couple of interesting aspects to the story. The first is Howard's use of Biblical history, particularly Moses. In this story, Natohk throws a spear or staff on the ground and it transforms into a serpent. This mirrors the account in Exodus when the Lord asks Moses to throw his staff to the ground. When Moses obliges God, the staff turns into a serpent. On a much higher level, I believe Howard used Exodus as a blueprint for this story. When Yasmela asks Conan to lead Khoraja's military, the muscular hero questions her choice. He's a lone-wolf, inexperienced leader and the most unlikely military commander. The same could be said for Moses. God asks Moses, an unlikely leader lacking experience, to lead the nation of Israel. The similarities are striking.

As an enjoyable reading experience, “Black Colossus” provides plenty of action-adventure, sorcery, chase sequences, and steel-meets-steel rallies. It's nearly perfect, flawed only by complicated character names and unnecessary backstory. Further, it is Conan's early development as an emphasis of the story. This work is forming the origins of Conan's eventual rise to King of Aquilonia, so it's important to the overall Conan mythos. Just as a stand-alone story, with no inkling of past or future events, it's still a rip-roaring good time.

Posted by Paperback Warrior at 8:59 AM