Conan - The Hall of the Dead 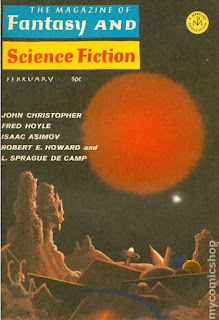 As most Robert E. Howard fans know, literary agent Glenn Lord located several boxes of the author's unfinished manuscripts in 1966. In an effort to collect the manuscripts into printable short stories, Lord acquired the talents of Howard scholars Lin Carter and L. Sprague de Camp to assist in editing and re-writing these stories.

One of these stories, “The Hall of the Dead”, was a fragmented Conan the Cimmerian document created by Howard and then re-worked by L. Sprague de Camp. This version was first published in The Magazine of Fantasy and Science-Fiction's February 1967 issue. It was also placed in the popular Conan paperback published by Lancer in 1967 and later reprinted by Ace. It also appears in 1989's Sphere publication The Conan Chronicles. Howard's original version, unedited by de Camp, was later published in the 2000s in two separate omnibus editions, The Conan Chronicles Vol. 1 and Conan of Cimmeria Vol 1.

Like many other stories, the era of “The Hall of the Dead” is set during Conan's thieving years, around 18-20ish. It picks up when Conan enters an abandoned, ancient city called Larsha. In a hot-pursuit is a group of Zamorian soldiers who have been assigned to arrest Conan for theft. These soldiers are led by Captain Nestor, who somehow escapes a trip-wire that befalls the entire group of men with an avalanche of rocks. With Conan in the abandoned city, Nestor enters hoping to solely capture him.

de Camp is often criticized for not “getting” Conan, and there may be sufficient evidence for that argument, but in stories like “Hall of the Dead”, it is all about telling an exciting story. Whether it was Howard or de Camp describing the empty streets, desolate houses, crumbled buildings, etc., the visual imagery is very evocative. It sets up the story and the atmosphere quite well.

As Conan engages in urban exploration, a giant slug squirms into the narrative to wreak havoc on the trespasser. This is typical “boss level” writing for sword-and-sandal or fantasy, when the hero matches power and strength with a big baddie. But, alas, this isn't the final boss. When the two characters decide to team-up and steal precious, forgotten treasures in Larsha's Royal Palace, a host of scary monsters appear to harass the thieves. This sets up the final boss battle.

There's nothing to really dislike about “The Hall of the Dead”, but loyalist complaints favor Howard's original version, which is shorter and features some differences in Nestor's actions in the story and the disappearance of the giant slug. In essence, I felt the story as a whole, regardless of writer, effectively placed Conan in a gloomy post-apocalyptic setting of an abandoned city, albeit a very short visit. Fans of Conan literature will easily recognize the moral preaching – bad things come to thieves. It's a recurring theme for these stories that feature a criminal-minded Conan on a self-serving mission to steal treasure. But, the fun is watching the struggle and inevitable loss. For that reason alone, “The Hall of the Dead” is worth the price of admission. Recommended.