Conan - The Treasure of Tranicos 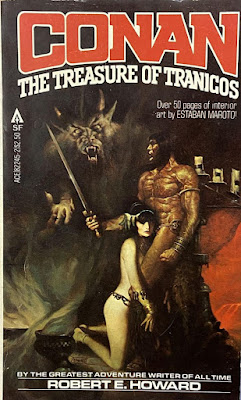 The first issue of the short-lived Fantasy Magazine was published in February, 1953. It's a notable issue  due to the inclusion of a previously unpublished Robert E. Howard story, “The Black Stranger”. The backstory on how this story appeared in the magazine, and its evolution into the later, novella-length version, The Treasure of the Tranicos, is interesting.

Like many of Robert E. Howard's Conan stories, “The Black Stranger” was submitted to various publishers in the 1930s, but wasn't purchased for print. Re-working the story without Conan, Howard morphed “The Black Stranger” into “Swords of the Red Brotherhood”, a pirate story featuring one of his lesser known heroes, a 17th century Irish peasant named Terence Vulmea, or simply Black Vulmea. This story wasn't published in Howard's lifetime, instead first appearing in the 1976 hardcover Black Vulmea's Vengeance in 1976 by Donald M. Grant.

“The Black Stranger” and “The Treasure of Tranicos”:

According to L. Sprague de Camp's introduction in Conan the Usurper, a 1967 Ace paperback collection first featuring “The Treasure of Tranicos”, de Camp discovered unpublished manuscripts written by Howard in 1951. With one of the manuscripts, “The Black Stranger”, de Camp took the liberty of editing and re-writing the story as an adaptation into the Conan saga, specifically Aquilonian revolution. Lester del Rey, editor of Fantasy Magazine, made further additions and deletions and published the manuscript as “The Black Stranger”. The story was re-titled to The Treasure of Tranicos and included the same year in a Gnome Press hardcover omnibus called King Conan. de Camp explained that the title change was a result of too many of Howard's Conan stories containing the word “black” in their titles.

The Treasure of Tranicos after 1953:

In Conan the Usurper's introduction, de Camp further explains he edited and revised the original “The Black Stranger” manuscript again for its inclusion into Ace's collection. He elaborates that he omitted del Ray's edits and additions to align the story even more with the Conan mythology. It was this version that was released as an Ace paperback in 1980. Howard's original manuscript, before any of de Camp's edits, was included in the Tor novella collection Echoes of Valor in 1987. It has since appeared in numerous collections and omnibus editions.

My review of The Treasure of Tranicos is based on the story's appearance in Conan the Usurper. It is essentially the “truest” version that relates to Conan. In the story's beginning, the titular hero is running through the Pictish Wilderness, crossing Thunder River and brushing up against the Western Sea. Chased by Picts, Conan is shocked when the painted, savage warriors refuse to venture forward. Instead, as if scared of this part of the mountainous shoreline, they retreat. Conan, puzzled by the experience, finds a wooden door recessed into the mountain. Forcing it open, he discovers a dark cavern filled with preserved bodies and shiny piles of hidden treasure. But, he's quickly choked by hands that appear out of a dark mist. Then, Conan disappears for the bulk of the narrative's first half.

In the next chapters, readers learn that this shoreline is a residence inhabited by Count Valenso. The Count, and his people, became shipwrecked and trapped on the shore months ago. Caught between the ocean and the savage Picts, the Count built a fort and has defended it since. Two rivals appear before the Count's fort, both greedy, savage pirates with a multitude of nefarious crewmen. It turns out that they have read pieces of a treasure map that points to the shoreline's location as home to hordes of precious loot. But, as Conan learned, it might come with a deadly price.

I can see that Howard's original manuscript was borderline Conan material. The Cimmerian isn't necessarily integral to the story, but by adding in a few descriptive details, and a brief mention of Aquilonian history, it works as another installment of the Conan mythos. As an aside, Howard scholars have previously noted that Howard's story has a western-frontier feel to it. Conan is mentioned as a “white man” and it isn't lost on readers that the Picts could be Native Americans. The shoreline fort is similar to the American southeast, notably the Carolinas and Floridian forts braced for French, Spanish, and English invasions.

If you enjoy a rousing, men's action-adventure story or novella, then The Treasure of Tranicos is sure to please. Conan fans, like myself, will obviously flock to anything written, or partially created, by Robert Howard. As a Conan tale, it's a little off-center, but possesses enough villains, sorcery, and barbaric action to keep it within the realm.