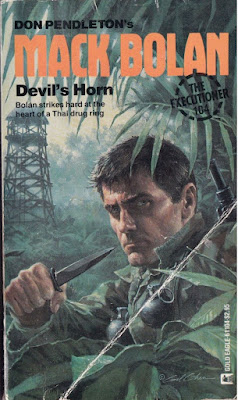 Remember the one where Mack Bolan becomes the star of the Chuck Norris “bring'em back” alive flick Missing in Action? Well, it never happened, but it should have based on Dan Schmidt's The Executioner installment Devil's Horn (1987), the 104th book in the series. Like a combination of Missing in Action, Rambo 2, and an installment of MIA Hunter, Devil's Horn deposits Bolan and Jack Grimaldi in a Southeast Asia Hellhole as prisoners in a drug cartel's brutal labor camp. Interested? Read on.

When Devil's Horn begins, Bolan is in The Bowery, the Lower East Side of Manhattan Island, trailing the origins of a massive amount of domestic drug imports. His trail leads to Ronny Brennan, a top-tier drug dealer with arms in various criminal factions as a Mob businessman. After Bolan destroys a drug warehouse, he pressures Brennan to reveal the source of a huge opium farm in Thailand. After a furious firefight, Bolan forces Brennan to ride shotgun as drug enforcers and low-level dealers tail the two to a local airstrip where Grimaldi is waiting. Quickly, Bolan and Brennan climb aboard as Grimaldi rockets the trio to Southeast Asia.

With a large load of armament and equipment, Grimaldi's plane flies over the whereabouts of the drug farm. But, he gets a little too low and the plane is shot down on the outskirts of the farm. While pushing Brennan into the bush, both Grimaldi and Bolan attempt to escape the onslaught of waves of Vietnamese soldiers, hired mercenaries, prison sentries, and drug enforcers. In a scene right out of Rambo 2, Bolan and Grimaldi climb a hill to make a final stand against the invading forces. Eventually, the two are forced to surrender and are ushered into the living Hell of prison life in the jungle.

A sadistic warlord named Torquemandan controls the Thai drug farm and has two top henchman inflicting years of punishment on the farm's prisoners. Bolan and Grimaldi discover that a large majority of the prisoners are American military prisoners-of-war that have been transported into Thailand by the Vietnamese government. Bolan also learns that there's a CIA spook imprisoned as well as many South Vietnamese prisoners that were allies to the U.S. during the Vietnam War.

The orientation outlines what Bolan and Grimaldi will expect in their new lives. The duo will join the other prisoners as slave labor. They work from dawn until dusk scraping the sap off of poppy seeds (opium) and placing it in buckets. Their only nourishment is a handful of rice and a cup of water at dinner. Most of the prisoners are on the verge of death and are routinely beaten, whipped, tortured, and killed. Bolan is warned by the prisoners to never eat the meat that is served with the rice - it's the cooked flesh of the prisoners that are executed! After the harvest season, the prisoners will carry 100-pounds of opium on their backs and forced to march 200 miles to deliver it. Most will then be executed or die of exhaustion.

I read Dan Schmidt's Eagle Force installment Death Camp Columbia years ago and loved it for all of the same reasons I loved Devil's Horn. I enjoy Schmidt's workmanlike writing style and his use of ultra-violent prison settings for both of these novels. Death Camp Columbia was authored just two years after Devil's Horn, and features a similar premise when the four-man mercenary team Eagle Force becomes imprisoned in a Columbian jungle Hell. It was obvious that Devil's Horn served as a template for that particular novel.

Schmidt is an on-the-nose writer that uses a low dose of gun-porn to describe and detail the harrowing action sequences in his men's action-adventure novels. His style incorporates a violent, gory combination laced with plenty of brutal scenes of torture and dismemberment. If you need “brains bashed into pulpy matter” then Schmidt is your guy. He was an active Bolan scribe and had a great handle on the high-numbered version of the character. In Devil's Horn, Schmidt also incorporates a human element to Bolan's suffering, but also a sympathetic, endearing quality to Bolan's love of American soldiers and the overpowering need to free the prisoners-of-war. I also enjoyed both Grimaldi and Bolan's chemistry while enduring the harsh elements and horrendous torture dished out by Torquemandan's henchmen. Needless to say, good things come to those who wait. The inevitable confrontation was worth the price of admission and felt like a satisfying conclusion to one of the most violent Executioner novels I've read. Devil's Horn is an absolute must-read if you love Mack Bolan.