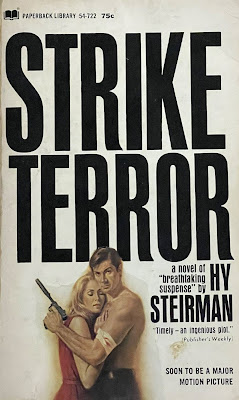 Hy Steirman (1921-2009) was born in Canada and settled in New York City, where he became an editor for the publisher Street and Smith during the twilight of the pulp era and later served as chairman of publishing at Warner Books. He wrote a few himself, including a spy series starring an ex-FBI man named Zachary Jones that only lasted two installments, the first being Strike Terror from 1968.

Zach Jones is a former FBI agent and widower doing his best to be a single father to a young son. He is pressed back into service by his former boss when a woman he used to know is injured in an accident while possessing deadly weapons and bombs. The KGB has dispatched five trained assassins to blend in with American culture to assassinate a U.S. Counterintelligence chief. Could this woman from Zach’s past be part of this deadly conspiracy?

Zach is a very interesting three-dimensional character that isn't often seen in men’s adventure paperbacks, and the novel’s villains are completely awesome in their originality. The Soviet assassins are sleeper agents born and raised in the U.S. with skills cultivated literally from the womb awaiting activation from Mother Russia.

The author toggles between Zach’s third-person perspective and the perspective of his Soviet-controlled adversaries. While this takes a bit of the mystery away from the plot, it certainly enhances the cat-and-mouse game at play throughout the fast-moving paperback. The plotting is more pulpy than a John LeCarre espionage thriller, but it’s way smarter than a Nick Carter: Killmaster disposable paperback.

The novel plays with many of the tropes one often sees in the genre, including a female partner who is not entirely trustworthy but oozes sex appeal. Watching Zach and his FBI friends thwart one assassination attempt after another made for some fun reading - even when the traps set for them veer into the kind of silliness often seen in The Destroyer series. To be sure, you’ll need to repeatedly suspend your disbelief as the novel progresses, but that’s part of the enjoyment of a men’s adventure series paperback.

Overall, Strike Terror is a winner with some outstanding action scenes, and I look forward to diving into the sequel, Cry of the Hawk, from 1970.