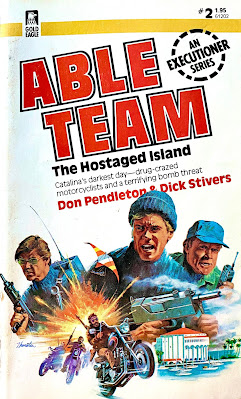 It's no secret that I really disliked Tower of Terror, the 1982 debut of the long-running Able Team series. I discussed it on the podcast and you can also read my review here. After reading the far superior Phoenix Force debut, I was interested in reading another Able Team installment in hopes for a triumphant rebound. I chose the series second installment, The Hostaged Island, published in 1982 by Gold Eagle. It was authored by L.R. Payne and Norman Winski.

Like many of the Mack Bolan Universe books, The Hostaged Island doesn't concentrate solely on the heroic trio. Thankfully, the authors create civilian heroes who work behind the scenes attempting to fight the enemy or simply survive. This was the best element of the series debut and one that allows readers to experience first-hand atrocities. Much of the book follows Catalina Island resident Greg and his pregnant wife Ann as they move from house to house hoping to avoid the bikers. Since most of the island is being held hostage in a local gym, Greg and Ann's story was enhanced by a “ghost town” or post-apocalyptic vibe.

Of course Lyons, Blancanales and Schwarz are the stars and they really make the most of their stage work. Unlike the debut, I really liked that all three heroes worked together through pages and pages of high-octane action. From a precarious raft landing on the beach to sniping off the bad guys from a tower, the authors spared no bullets in the good versus evil traditional concept. I felt the characters really worked as a team and finally were able to strut their stuff without all of the interviews and planning that bogged down the debut installment.

If you want balls to the wall, over-the-top zany action, The Hostaged Island delivers it in spades. This was just a real pleasure to read and rejuvenated me on the potential for more and greater gems within this long-running series. Highly recommended!