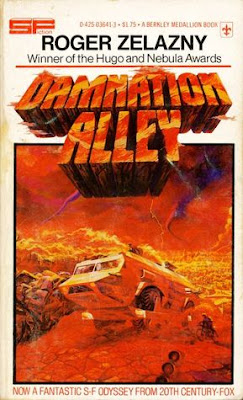 Roger Zelazny (1937-1995) was a Hugo/Nebula award-winning science-fiction and fantasy author. His most noteworthy achievements are the first ten novels of his acclaimed Chronicles of Amber series, published between 1970-1991 and his 1968 post-apocalyptic novel Damnation Alley. The book has been reprinted numerous times and was loosely adapted to film in 1977 starring George Peppard and Jan-Michael Vincent.

In Damnation Alley, the Earth as we know it no longer exists. Decades before, a nuclear war decimated the planet and what's remains is a mere shell of what life originally resembled. In the skies, hurricane-strength winds prevent any form of air travel. The atmosphere is a swirling belt of dust and garbage set into eternal propulsion by the howling winds. The radiation has mutated animals and insects and what remains of America is a fractured ruling class divided into regions.

The book stars a former Hell's Angel biker named Hell Tanner. He's a ruthless anti-hero who was abandoned by his father as an infant. His mother died in his early childhood and Tanner was passed around from home to home until he found a permanent residence within the ranks of the Hell's Angels. When readers first meet Tanner, he's racing his Harley Davidson through the twisting roads of San Diego. His pursuers, the Nation of California's law enforcement, have warrants for his arrest. After successfully outrunning the cops, his day ends with a roadblock and a busted bike.

While in police custody, Tanner is offered a unique proposition. His criminal record of killing three people and resisting arrest, will be wiped clean if he can successfully deliver an antivirus to the city of Boston. The trip across the country has rarely been completed due to the nearly insurmountable odds. With the journey consisting of raging storms, mutants, biker gangs, road bandits and plague, the pathway is referred to as Damnation Alley. Between prison or the road, Tanner chooses to suit up and drive a sophisticated vehicle across the country in hopes of delivering the much-needed medicine and winning his own freedom.

This book would have made more of a personal impact if I read it at the time of its original publication. While its unfair to Zelazny, his post-apocalyptic action tale was used as a blueprint by numerous authors to write better versions of this book. Damnation Alley isn't terrible, but it's a slow burn that never reaches the roaring blaze I had hoped for. Much of the book is simply Tanner driving, eating and sleeping. Every few pages he shoots a giant bat or kills some bikers, but these are just bumps along the road to what is otherwise an unexciting plot. Tanner isn't a likable character by any means, and often I asked myself if I really cared about his success. Other than a partner named Greg, who is quickly written out of the narrative, there aren't many admirable characters. The lack of action, character development or dynamic story were detrimental to the reading experience. However, high praise is still warranted due to what Zelazny created. 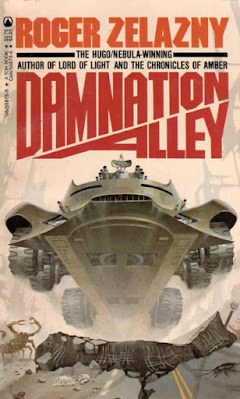 Damnation Alley, in both book and film form, are very influential to the post-apocalyptic genre of men's action-adventure novels. There's no question that it inspired a number of commercially successful titles.

- The vehicle that Tanner is driving is similar to what authors Ed Naha and John Shirley conceived with their 1984 series Traveler. Through Traveler's 13-book series, the protagonist drives a fortified van deemed “The Meat Wagon.” While it lacked the sophisticated wizardry showcased in Damnation Alley, the use of van portholes and machine guns to anonymously eliminate potential threats mirrors Zelazny's approach.

- Again, the idea of the “all-terrain fortified vehicle” can be found in the debut of Deathlands, a 138-book series of post-apocalyptic adventures. Series hero Ryan Cawdor is on board a trio of armored tractor-trailer trucks that are equipped with cameras, mounted cannons, numerous guns. Like Tanner, Cawdor and company use the safety of the vehicle as a sort of road residence.

- There is no doubt that Zelazny's conception of a fragmented America can be found within a number of series titles like The Last Ranger, Doomsday Warrior, Out of the Ashes and Endworld. But, perhaps the most similar is Robert Tine's 1984 five-book series Outrider. In it, the former United States is now divided into ruling class sections that surround a metropolis. Like Tanner, the series stars a lone-wolf named Bonner as he navigates the post-apocalypse in a jacked-up dune-buggy equipped with weapons.

- In 1977's post-apocalyptic novel The Lost Traveler, authored by Steve Wilson, a biker hero named Long Range roams a nuked-out wasteland. Like the aforementioned titles, this one also includes a fragmented America and disputes between warring clans. Where Damnation Alley sort of condemns the Hell's Angels, Wilson pulls no punches as he makes the famed biker gang a ruthless and criminal government body.

- In 1984's Angels, the third installment of the four-book series Wasteworld, hero Matthew Chance is pitted against a gang of post-apocalyptic Hell's Angels.

While Zelazny's concept of Damnation Alley is mostly an original, innovative take on doomsday, it does come with a borrowed idea. In 1959's We Who Survived, author Sterling Noel places his heroes in a fortified, all-terrain vehicle that is used for defense, housing and drilling through a post-apocalyptic America ravaged by an eternal ice-storm. Perhaps Zelazny was influenced by Noel's conception of “road warriors” surviving doomsday by using an advanced, nearly indestructible vehicle? I'd suspect so.

Buy a copy of this influential book HERE