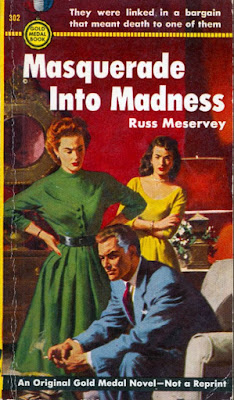 Between 1929 and 1940, H. Russell Meservey wrote dozens of adventure stories about fighter pilots for the airplane pulp magazines. Then a Wisconsin native named Russell Clare Meservey (died 1994) came out of nowhere in May 1953 as the author of a sole Fawcett Gold Medal crime novel, Masquerade Into Madness. Same guy? Father-son? Coincidence? No clue.

Our narrator is a Manhattan tough-guy tavern-brawler named Barney Nash. A skid row bar fight with two off-duty cops lands him in jail overnight, and he meets a crooked attorney at his arraignment. The lawyer offers to bail out Barney, if he’s willing to do an acting job in exchange for his freedom. Specifically, the attorney needs Barney to masquerade as someone else in exchange for his freedom.

Here’s the set-up: Ten years ago, a 20 year-old man named Chadwick Graham disappeared. His widowed mother is now 70 and has spent a fortune trying to locate her missing son, engaging her lawyer to manage the project. The attorney has come to the conclusion that Chadwick is dead but wants to honor Mrs. Graham’s dying wish to see her son one last time. He wants Barney to pretend that he’s the missing Chadwick for a single command performance beside Mrs. Graham’s deathbed.

After some hand-wringing and blackmail, Barney agrees to help. As you’d expect, things get complicated upon his return “home” to see “mom.” The old lady lives in a mansion on a remote island three miles off the coast of Maine where things quickly begin feeling less hardboiled and more Agatha Christie. It also becomes clear that the subterfuge has nothing to do with giving Mrs. Graham comfort in her waning years and is actually about the expected inheritance.

The problem with Masquerade Into Madness is that after a strong start, it’s boring, boring, boring. Not much happens on the island other than relationships forming and alliances shifting. Some minor mysteries are solved towards the end, but they’re nothing surprising or worth pursuing. Meservey was a good writer, but his plotting needed some desperate work. He should have written more novels during his life because no one should be remembered by this one.