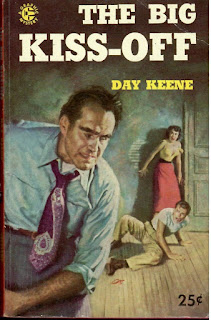 Day Keene (real name Gunard Hjerstedt) cut his teeth on short-stories and pulp writing in the 1930s and 1940s. Like so many pulpsters, Keene successfully transitioned into paperback originals and authored 50 novels until his death in 1969. Stark House Press is one of the reprint houses that keeps Keene's top literary work alive and thriving. The publisher reprinted three of the author's novels as one volume – Dead Man's Tide (1953), The Dangling Carrot (1955) and The Big Kiss-Off (1954). I chose The Big Kiss-Off to read and review.

Cade Cain grew up barefoot and free in the swamps and canals of Bay Parish, a small town nestled just south of hot-footed New Orleans. After joining the Air Force and becoming a Captain in the Korean War, Cain was shot down by the enemy and remained a prisoner-of-war. After a long military career and two harsh years of eating fish heads and rice, Cain has finally returned to his childhood home after a 12-year absence. But not everyone is happy to see him.

In the book's first part, Cain finds himself ordered out of Bay Parish by the local sheriff. Not understanding this threatening situation, Cain later finds a beautiful Spanish woman named Mimi stealing food from his boat. After scolding her, he learns that Mimi is an illegal alien in the U.S. searching for her husband, an American soldier named Moran. After attempting to find Moran in Bay Parish, Mimi and Cain return to the boat and find that someone has shot the sheriff. In an effort to frame Cain, the bloody corpse has been placed on his bunk with the murder weapon. High-tailing it out of town, Cain and Mimi now must dispose of the body and find the answer to this wild and riveting murder mystery.

There's so much to like about Day Keene's swampy crime-noir. While it still fits the author's over-utilized formula of “wanted man on the run to prove his innocence”, there's more emphasis on a backstory between Cain and his ex-wife Janice as well as Mimi's immigration troubles and her speculative marriage. The author combines this deep-seated mystery with a nautical nuance and places it on a fast-paced narrative just brimming over with interesting characters. The sexual tension between Cain and Mimi is intense and hot. I couldn't help but imagine Mimi as a young Eva Longoria flaunting her wares on the sun-drenched deck. Keene's use of her innocence and inability to adapt to America to add even more vivid flirtation to the narrative.

I think Ed Lacy may have borrowed Keene's premise for his 1959 novel Blonde Bait. The idea of a fugitive on the run in his boat with a busty babe was probably a popular literary trend of the 1940s and 1950s, but nevertheless Day Keene executes it flawlessly inspiring further imitation. Aside from Joyhouse, The Big-Kiss Off might be my favorite novel of Keene's exceptional career. Highly recommended.