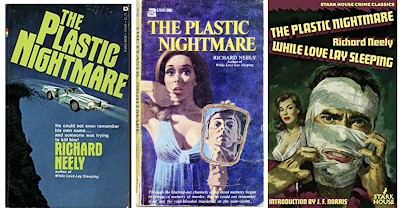 After a successful career as an advertising executive, Richard Neely (1916-1999) left it all behind to become a full-time writer. He authored 15 novels in the 1960s and 1970s, including The Plastic Nightmare from 1969. The book was the basis of the 1999 film Shattered and has been re-released by Stark House Press in a double - packaged with Neely’s While Love Lay Sleeping.

Our narrator Dan Marriott awakens in an Santa Barbara hospital room with his head wrapped in gauze and all memories completely erased. Months of hospitalization and plastic surgeries restore his face to something resembling his original self before the car accident decimated his body and sense of personal history. None of what people tell him about himself sounds the least bit familiar. His name, his wife Judith, and even his own reflection all seem foreign to him.

With no remembered experiences to give him insight into his own character, Dan is a blank slate free to follow his instincts, and his gut is telling him that something is seriously wrong here. With the bandages off, Dan and Judith leave the clinic and go to a beachfront cottage together to transition amnesiac Dan back into society before returning home to San Francisco. Meanwhile, Dan is having visions - words and images flashing through his consciousness - tied to who he used to be.

As Dan’s face and body heal at home with Judith, it becomes clear that she is hiding something about him and the accident that took his memory. He begins to piece together that before his accident, his marriage wasn’t all that hot. As the evidence mounts, Dan begins to suspect that his car crash may not have been an accident at all. But why would Judith attempt to murder Dan, when a simple divorce would have sufficed?

As an avid reader of vintage paperbacks, I saw where this one was headed from a mile away, but that didn’t diminish my enjoyment of the book. A mystery concerning a narrator’s past makes for fascinating reading. At times, the plot reminded me of the brilliant Christopher Nolan movie Memento. Neely sprinkles in some rich and colorful characters, including a private detective hired to get to the bottom of things.

I loved this book. It was so clever and well thought-out that it makes me want to explore more of Neely’s fiction. Fans of awesome suspense novels owe a debt of gratitude to Stark House for resurrecting The Plastic Nightmare. This is don’t-miss, essential reading. Highest recommendation.