They All Ran Away 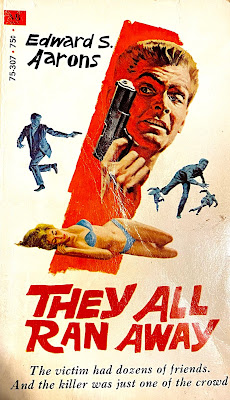 Before focusing his efforts on his bestselling series of Assignment books starring CIA operative Sam Durell, Edward S. Aarons authored a number of good, stand-alone crime-noir novels. I've reviewed a lot of these including Gift of Death (1948), The Net (1953) and Terror in the Town (1947). There are still so many of the author's pulp stories and crime novels to explore. I decided to try another one with 1955's They All Ran Away. It was originally published by Graphic Mystery and then reprinted in 1970 by Macfadden-Bartell.

Using the private-eye formula, Aarons introduces readers to Barney Forbes, the book's hard-charging protagonist. Forbes was an MP in the Army before becoming a New York detective. After his wife's tragic and sudden death, Forbes left law-enforcement to pursue a career as an attorney. With his new profession, Forbes is struggling to pay the bills and second-guessing his career change. Thankfully, a successful law firm that specializes in estates hires Forbes to utilize his detective skills to service one of their own clients.

A wealthy man named Malcolm Hunter has come up missing in the small, mountain lake community of Omega. The firm's client is Malcolm Hunter's brother Jan, a rather abstract young man who is fed money by the Hunter trust. This missing person case brings Forbes to upstate New York to find where Malcolm is.

With the book weighing in at just under 150-pages, Aarons surprisingly packs the narrative with a rich blend of mystery and full-barreled action. Like Gift of Death and Terror in the Town, this author excels when setting the story within a small waterside community. Instead of the northeastern Atlantic, the author utilizes rural lake houses to create a thick atmosphere that works as the perfect backdrop for the mystery to unwind. I think Aarons was one of the best authors in the business in describing the locales and making them seemingly come alive as just another character.

Forbes is an easily likable character, and I loved his alliances with the troubled town sheriff and an eccentric Native American. Like any good crime-noir, Forbes also has his share of beauty queens to contend with. The backstory of Forbes losing his wife plays a key element in his fixation on Malcolm Hunter's abused wife. With just a dose of romance and tension, They All Ran Away fires on all cylinders and proves once again that Edward S. Aarons was a great storyteller. Highly recommended.