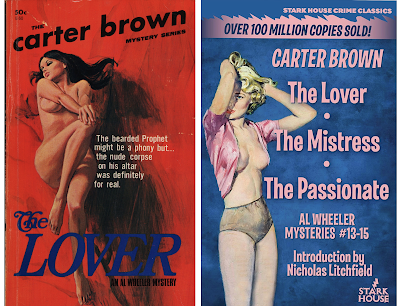 Using the pseudonym Carter Brown, Alan Geoffrey Yates (1923-1985) authored 215 novels and 75 novellas and counted U.S. President John F. Kennedy among his fans. His most enduring character was California-based police detective Al Wheeler, and Stark House Press has just released another three-pack of Wheeler mysteries anchored by The Lover from 1958.

In this case, Detective Wheeler is dispatched by the Sheriff to investigate a loony cult in the mountains run by a dude calling himself The Prophet. His followers allegedly engage in sun worship, group sex, drugs and fertility ceremonies. The Sheriff is concerned that this screwball religion may break bad in some unforeseen manner and orders Wheeler to investigate and provide his assessment.

Wheeler heads to the mountain to watch The Prophet in action. The cult leader is tanned and muscular wearing only a loin cloth and appears to worship the sun without metaphor or irony. The Prophet’s spiel is pretty pro-forma until he starts preaching that the Sun God demands a sacrifice.

This wouldn’t be much of a murder mystery if no one got killed. As such, after meeting a cadre of the Prophet’s devotees, we finally get a murder for Wheeler to solve. The author introduces a lot of characters (probably too many) who are all regarded as suspects. For his part, Wheeler is more full of wisecracks than I recall from other installments I’ve read. I’m betting that the upswing in Shell Scott’s popularity around 1958 influenced Yates to ratchet up an the pithy quips for Detective Wheeler to deliver.

Beyond that, this is a pretty standard whodunnit mystery with colorful characters and a logical, satisfying conclusion. Carter Brown mysteries have always served as pulp mystery comfort food - a palette cleanser between more substantial novels. You always know what you’re getting, and the thin paperbacks always deliver the goods. The Lover was no exception - you know exactly what you’re getting, and it’s always a good time. Recommended.