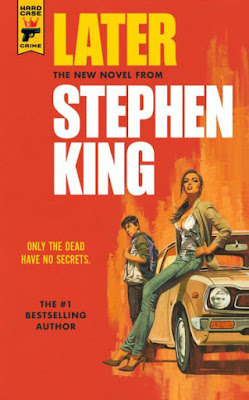 Since 2004, Hard Case Crime has been the nation’s most successful publisher of new and reprint crime fiction. In 2005, the upstart paperback house struck literary gold with the publication rights to Stephen King’s The Colorado Kid. It happened again in 2013 with Joyland, and now again in 2021 with his new book Later.

Our narrator is a 22 year-old young man named Jamie Conklin telling the reader the story of things that happened when he was a kid. Jamie is the only son of a single, literary agent mother in Manhattan. Jamie also sees dead people - pretty much just like the kid in The Sixth Sense. He warns the reader in his intro, “I think this is a horror story.” It’s the truth, but the story takes awhile to heat up before things get truly scary.

Jamie explains that dead people always tell the truth when they talk to him. Sometimes they say something funny and blunt like telling the boy that his school art project sucks. Other times it’s a useful tip like where the old lady hid her jewels before she passed away. His access to the dead is limited to the few days after passing before the deceased fade away into the great beyond. Jamie is candid with his mom about his ability, and she warns him to never tell anybody that he sees dead people.

Later jumps around quite a bit while focusing on Jamie’s upbringing and a variety of incidences where his ability to see and illicit information from dead people proves useful. Mom’s best friend is an NYPD detective named Liz. She’s the stacked brunette on the book’s cover. Over time, Liz comes to believe and accept Jamie’s sixth-sense and figures out some uses for it in the realm of her police work. As such, Jamie gets pressed into service by Liz using his unusual ability.

King writes Later in a breezy first-person style with super-short chapters that are easy to follow despite the often non-linear timeline. It takes forever for an actual plot to develop, but you don’t really mind because Jamie is a likable kid who makes the reader invested in his well-being. As advertised, the paperback eventually becomes a horror story with some honest-to-goodness creepy and unsettling set-pieces reminding the reader that Stephen King still has chops.

Beyond that, there’s not much to tell that won’t spoil the fun for you. Later is a quick and fulfilling read - arguably the strongest and most on-brand of his Hard Case Crime offerings. King excels at this kind of of coming-of-age horror story with vivid characters and chilling situations with a good hero confronting supernatural evil. King has a large back catalogue of epic works, so Later is unlikely to be your favorite among them. However, I can’t imagine any of his fans walking away dissatisfied from this superb little novel.