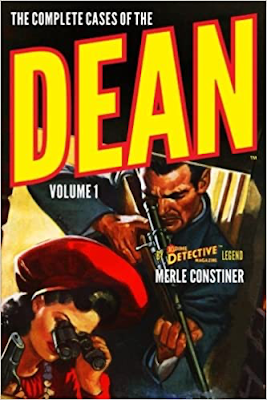 Ohio native Merle Constiner (1901-1979) was a successful author of westerns and crime fiction who began his career in the pulp magazines and transitioned successfully to paperback novels in the 1950s. One of his most enduring characters was con-man/private eye Wardlow “The Dean” Rock who appeared in a series of novellas in Dime Detective Magazine between 1940 and 1945. Altus Press has compiled several of these stories into one volume as The Complete Cases of The Dean, including his first adventure, “Stranger’s Kill”, originally from August 1940.

The Dean stories are narrated by his sidekick, Ben Matthews in the same manner that Watson narrates the Sherlock Holmes stories or Archie Goodwin tells the Nero Wolfe tales. For his part, everyone’s first impression of The Dean is that he’s a screwball and a crank living with Ben in a slum while pretending to be a fortune teller who can divine your future from the bottoms of your feet. He’s also an amateur detective maintaining a good working relationship with the police chief.

As we join The Dean and Ben in “Stranger’s Kill,” an arsonist has been plaguing the city for six months targeting grocers, delis, and other retail stores. The Dean offers his services to the fire insurance company to catch the arsonist within six days for a $20,000 fee. The body of the insurance company’s CEO was found strangled in one of the fires, so this is more than a normal firebug.

The Dean’s detecting methods are mostly the same kind of deduction utilized by Sherlock Holmes, but he’s willing to run down leads in the street with Ben and get his hands dirty. He’s also a funny guy with A+ wisecracks along the way. By 1940, Constiner was a solid writer and his prose is smooth, never choppy, with logical, well-paced plotting. Unlike Carroll John Daly’s Race Williams stories of violence and vengeance, The Dean is a more gentlemanly mystery solver who puts together intricate puzzles over the course of 60 pages per story.

Like many pre-1950s mysteries, “Stranger’s Kill” has far too many characters and far too little action. It’s a well-crafted mystery, but it was a bit dull and ultimately failed to grab me. I’ll probably read another novella sometime in the future because I enjoyed both the character and Constiner’s writing style, but the story mostly left me cold.