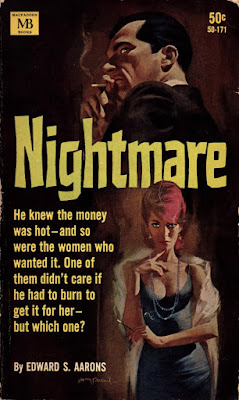 Author Edward S. Aarons wrote 20 books between 1936 and 1954, including a number of short-stories for pulp magazines including Popular Detective and Thrilling Detective. I've covered a number of the author's early crime-noir novels and was happy to find a 1971 McFadden-Bartell paperback reprint of his 1948 novel Nightmare. It was originally published under the pseudonym Edward Ronns.

WWII veteran Nolly is living the American dream in New York City. He's been married to his beautiful wife Susan for five years. He has a great job working at Globe Finance where he manages payroll, mortgage loans and the vault. He enjoys working for his boss, Mr. Wright, and each evening he happily walks his dog around the block. It's the quintessential “white picket fence” lifestyle. But, like any great crime-noir, Nolly's life is turned upside down when he is placed in an extreme situation.

After a rare night out with his three co-workers, Nolly returns to his home in an early-morning drunken stupor. After discovering his wife isn't home, Nolly receives a phone call from a mysterious voice telling him to get over to Globe Finance. When he arrives there and unlocks the door, he's hit in the head and blacks out. He wakes up to discover his boss, Mr. Wright, has been murdered and $40,000 is missing from the bank vaults. Complicating matters is that Nolly finds a gun in his pocket that apparently was used as the murder weapon.

We’ve all read this sort of story before. It's the familiar “man wakes up beside a corpse” plot where the innocent party must scour the town for clues in search of the killer. Unlike Aarons' seaside, rural novels like Terror in the Town and The Net, it was interesting to read Nightmare's story unravel in an urban setting. In some ways, Aarons' writes this in a way that would later become the dominant approach by writers like Ed Lacy and Henry Kane. He still manages to insert his seaside, darker aura to the story near the end (the characters end up in marshy New Jersey), but this one has a unique voice that isn't the standard Edward S. Aarons crime-noir.

As I read more and more of Aarons' crime literature, I move him just a few more rungs up the ladder. I don't think he's a Harry Whittington or John D. MacDonald caliber storyteller, but he does sit somewhere firmly in the middle of the pack. He's never boring, never dull, but he's never created anything particularly innovative or remarkable. Nightmare proves that Aarons was just another good, dependable mid-20th Century writer. Sometimes, that's all we are really dreaming for anyway.