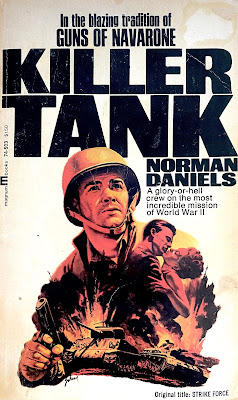 Norman Daniels found enormous success authoring various pulp characters like The Masked Detective, The Black Bat, Phantom Detective and even Doc Savage. After the pulps gave way to paperback originals, Daniels transitioned into a prolific author of crime-noir, romance, television novelizations and military-fiction. In 1965, Daniels wrote the WWII novel Strike Force for low-end publisher Lancer. In 1969, the equally low-brow publisher Magnum reprinted the novel as Killer Tank with the sales tag of “In the blazing tradition of Guns of Navarone.” Loving most of Daniels' literary work, as well as military-fiction, was enough motivation to spend a few bucks on this old paperback.

The book is set in Germany during WWII. The U.S. military formulates an idea that they can create a huge, powerhouse diversion on the German border. Using a number of planes, tanks and troops, they will fake an impending invasion and engage the enemy just long enough for a team of 30 tanks to slip in over the border and become a mobile task force. This task force, led by Colonel Hagen and Sergeant Dixon, will orchestrate hit-and-run attacks on German forces, towns, bases and airstrips. By disguising the tanks as German, and using old, overgrown roads, the force plans on creating as much undetected destruction as possible. The problem with that strategy? Hagen and Dixon despise each other.

The adventures of a WWII tank battalion operating in Germany can be an entertaining read with enough attention to the action. What makes Killer Tank different is that Daniels creates this really interesting back story between Hagen and Dixon. Through the first 100-pages the readers can easily determine that the two have history with each other. But, when Hagen begins to romance a beautiful French woman, Dixon becomes Hell-bent on destroying any hopes for Hagen's happiness. What is the history between these two American commanders? How could anything warrant this much hatred and animosity? I won't ruin the story for you, but the tension and suspense eventually percolates to a hot, boiling inferno. Just when I thought I had it figured out, the last few pages came out of left field with a right hook. I was dumbfounded.

With the focus on character development and a thick tension between Dixon and Hagen, Killer Tank serves as a hybrid of WWII and crime-noir storytelling. While I wasn't necessarily bored with the plotting and pace, I will say that Daniels never fully commits to either genre. When I wanted a more serious action novel the story slowed to a conversational tone. When I needed the characters to come to blows, the military action consumed the story. I couldn't quite walk the high beam that Norman Daniels built for me. The balancing act didn't work as well as I had hoped for. But, nevertheless Killer Tank is an entertaining read that probably could have been improved with a few precise touch-ups to the storytelling. You won't hate it, but I'm not sure how necessary this paperback really is. There are far better crime-noir and WW2 books out there.