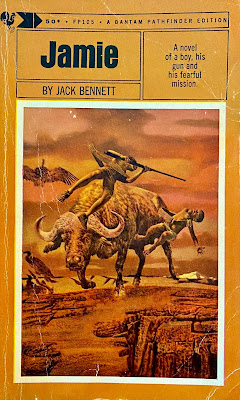 Earlier this year I discovered South African author Jack Bennett (1934-2000). Of the eight literary works that I can identify, it seems that most were hardcovers published in Europe with poor or misleading covers. The comparisons to Ernest Hemingway are abundant in the writer's use of primitive simplism. After reading and reviewing his 1967 novel The Hawk Alone, I was ecstatic to locate another of his Bantam paperback reprints. Jamie was originally published in Europe in 1963 and later reprinted by Bantam as a Pathfinder Edition paperback in 1965.

Like The Hawk Alone, Jamie is set in the late 1950s and early 1960s in South Africa. Parallel to the book's title, the narrative focuses on a young white boy name Jamie Carson and his coming-of-age transition on the western flats of Buffelsvlakte. In the book's beginning, readers learn that Jamie had an older brother that died. His father Edward loves Jamie, but was grooming his brother to be a farmer and hunter – not Jamie. While convinced Jamie wasn't destined to be a farmer, Edward must contend with the fact that he now has one child to carry this labor intensive burden.

Through the book's early pages Jamie's life from age eight to ten is outlined through his father's wisdom and guidance. Slowly, Jamie begins working the family's 1,800-acre cattle farm and assuming more responsibility with guns and hunting. With Jamie's farm bordering a sprawling government game preserve, the likelihood of stray bulls, lions and tigers wandering onto the property is high. Complicating matters is that a long-lasting drought descends on the region, making water sparse upon the dusty plains. With the wildlife parched from thirst, the book escalates the action into more of a safari and hunting expedition. This portion of the book was the marketing highlight chosen by Bantam, evident with the cover and its tagline - “A novel of a boy, his gun and his fearful mission.”

With this book published just two-years prior to The Hawk Alone, there's no doubt that Bennett connected these two novels as book ends. While The Hawk Alone tells the story of Gord, an aging man contemplating his own morality, Jamie is the opposite as readers learn about the boy's upbringing and the hardships that transition him to manhood. This novel has the emotional, and inevitable, “end of innocence” moment when Jamie realizes that life is precious yet exceedingly difficult. The Hawk Alone flips that sentiment to the fact that Gord's difficult life leads him to the point of suicide. Bennett writes these books well and showcases an amazing grasp on life even while crafting these stories in his early 30s.

As a more literary styling than high-adventure, Jamie excels as a masterful novel of youth and fortitude. Don't let the simplistic title or concept fool you. No matter what genre you enjoy reading, there's no doubt that Jamie will make you feel something. From laughter to tears, Bennett constructs the ultimate coming-of-age tale with Jamie. I loved this book as a stand-alone work but when packaged together with The Hawk Alone, it makes for an incredible masterpiece of epic literary fiction. It brings me so much joy having these two books as highlights in my paperback library.