Warrant for a Wanton 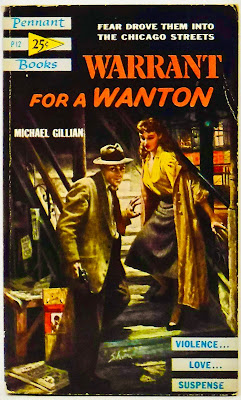 Between 1946 and 1953, Leslie John Edgley (1912-2002) authored nine books using his own name as well as the pseudonym of Robert Bloomfield. In 1953, he utilized the pen name Michael Gillian for a single novel titled Warrant for a Wanton.

Leith Hadley has just been sentenced to death in the electric chair for the murder of his business partner at the travel agency they jointly owned. Immediately following the imposition of his sentence, Leith bum-rushes the courtroom guards and flees the municipal building onto the Chicago city streets - handcuffed but free for now.

Seeking refuge, Leith breaks into an apartment and stumbles upon an unconscious woman overdosing from barbiturates - a likely suicide attempt - whose life he quickly saves. Her name is Christine, and she will be joining Leith on his “man on the run establishing his own innocence” adventure. The catch is that Leith isn’t even 100% certain that he’s not guilty. After discovering an embezzlement by his partner, Leith got blackout drunk and was seen boarding his partner’s yacht where his brutalized body was later found. Leith awoke the next morning in a cabin with no memory of what he did or didn’t do the night before.

Circumstantially, this all looks rather bad for Leith. That’s why the State’s Attorney had no problem securing his murder conviction in front of a jury. The quest to establish his innocence takes Leith all over Chicago revisiting witnesses who may have perjured themselves as the trial. This initially bears no fruit and makes Leith look like an escaped maniac.

The first half of the book was pretty dull. The plot was going nowhere, and Leith was getting no closer to the truth. Then something happens at the halfway point that changed the pace of the paperback. I generally hate to spoil that plot point, but suffice it to say that the author devises a unique literary scheme for Leith to establish his own innocence while packing on some action scenes as the hero gets closer to the truth.

The clandestine re-investigation brings them into the criminal underworld where Leith’s murdered business partner had been losing a small fortune gambling in back-room mob casinos. The conclusion to the whodunnit mystery was a bit convoluted and contrived for me. Overall, I didn’t hate Warrant for a Wanton, but I’m unlikely to strongly recommend it to anyone either. It’s not an awful book but really nothing special. Just file this paperback in the “why bother?” stack and move on with your life and better books.